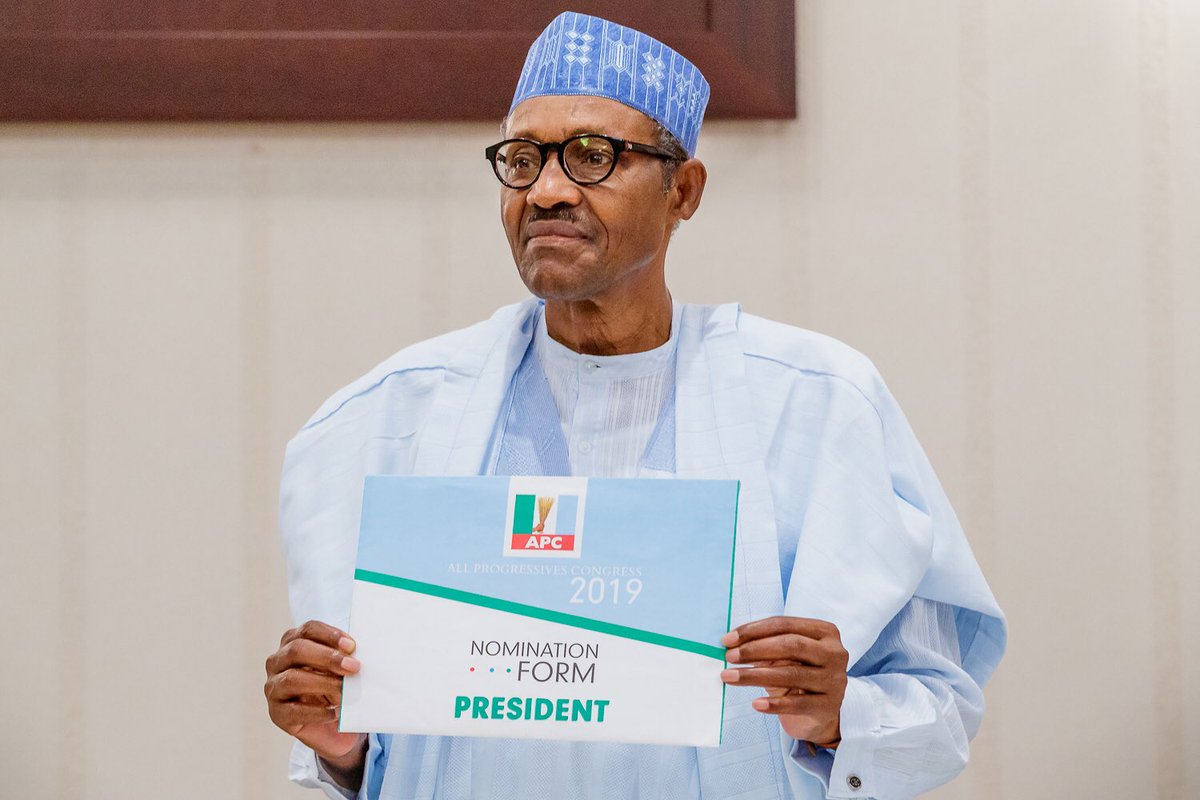 President Muhammadu Buhari on Tuesday collected the All Progressives Congress expression of interest and nomination forms donated to him by a group of Nigerians.

The group, NCAN, had last week announced it bought the N45 million form for the incumbent president.

The form was presented to Mr Buhari at the State House, Abuja on Tuesday.

Read the president’s full speech below.

1. As I look around this room today, I am pleased to see many familiar faces as well as new ones. All united by a common vision of having a united, prosperous and secured Nigeria.

2. As a movement, our political journey started as far back as 2002. At that time, the country was still recovering from military rule. Although the country was united to protect its democracy, majority of Nigerians felt the then democratically elected government did not focus on addressing the challenges of the average citizen.

3. I recall some of you in this room visiting me in Kaduna and demanding that I come out of my second retirement to participate in politics. At that time, we felt our young democracy, and indeed our country, was heading in the wrong direction. Our resources were being wasted. The future of our children and their children was at risk.

4. I was a bit reluctant to be honest. You all remember my first retirement in 1985 started in a small bungalow in Benin City. After which I relocated to Kaduna to a slightly bigger house where I mostly stayed until 1994.

5. In 1994, I was asked by a Head of State to come out of retirement and serve my country as the Chairman of the Petroleum Trust Fund popularly known as the PTF. I was at the PTF until 1999 when I was asked to proceed on my second retirement.

6. Both retirements had one thing in common; the organisation I was heading was abruptly disbanded and my family life significantly disrupted. So naturally in 2002, I was reluctant to come out of this second retirement which I was enjoying in Kaduna with my family.

7. However, the argument put forward then was very compelling. The selfish-interest of our elected leaders superseded national interest. This needed to be changed. This change must be through democratic process as prescribed by our constitution. So we went to work. We campaigned hard and formed a credible opposition.

8. Nigerians voted, but when the results came out, we had lost by close to 12 million votes. The statistics did not add up.

9. We fought in the courts for over 2 years. Finally, the Supreme Court ruling was not in our favour. We accepted the results and I went back to Kaduna with the hope that we had seen the worst, and like all of us in this room continued to pray for better days ahead.

10. In 2006, many associates including some of you once again convened in Kaduna. This time, it was clear for all to see. The country was getting worst. The system remained engineered to favour the voted at the expense of the voter.

11. We came out once again with our simple mission to CHANGE things, since it was our desire that the dividends of democracy must be felt by all and not just a handful.

12. When the 2007 election results came out, we were told we lost by over 18 million votes. The election was a national disgrace. The international observers called it “charade”, “flawed” and “illegitimate”. Even the declared winners were embarrassed by the results.

13. Again, we decided to do the right thing. We went to court. And like in 2003, the Supreme Court upheld the results. This time, Nigerians were not deprived of their basic rights; it was actually stolen from them right in front of their eyes in broad daylight.

14. During the 2011 elections, things got a bit better compared to 2007. We only lost by 10 million votes, according to the electoral commission.

15. However, by this time, many Nigerians had lost hope. Our country was deteriorating at a very fast pace. The gap between the wealthy, rent-seeking ruling class and the rest of the country was widening astronomically.

16. By 2014, Nigeria, the most populous country in Africa and the largest economy by Gross Domestic Product could not feed itself or protect itself. It got to a state where government was borrowing to pay salaries although they had record breaking oil revenues.

17. As our country moved backwards, the world continued to push ahead.

18. Whether it was by design or through divine intervention, the Permanent Voters Card (PVC) was introduced for the 2015 elections.

19. The PVC became the saviour of Nigerians. This meant every Nigerian had an equal voice in elections and it brought an end to the impunity of the past.

20. Finally, the people’s voice could be heard and eventually was heard through the ballot box. Our dream for change, which started in 2002, became a reality.

22. On the national security front, we have regained lost territory in the North East. We are decisively addressing new security challenges locally while maintaining our regional and international commitments.

ü we are completing old rail and road projects and starting new ones;

ü we are reviving power projects that were abandoned for decades;

ü we are developing affordable housing projects across the country;

24. On food security, we have supported our farmers to produce. We have rehabilitated abandoned fertiliser plants. We have seen unprecedented investments in food processing. All these have led to a decline in food and other agricultural imports.

25. Our fight against corruption is also yielding results. The strict implementation of the Treasury Single Account has stopped leakages in government activities. Our aggressive anti-corruption campaign has shown that it is no longer business as usual.

26. Our social investment programme is:

ü providing cash to the most vulnerable and poorest Nigerians

27. Our economic recovery and growth plan has created the platform for a diversified, sustainable and inclusive economy for future generations.

28. We have also engaged the oil and gas sector to ensure investments continue in the upstream sector, while at the same time reducing scarcity and shortages of products in the downstream sector.

29. Ladies and gentlemen, these achievements over the past three years have not been easy. Corruption has been fighting back from both within and outside. But we held our ground.

30. Today, I am pleased to say the weakest ones amongst us, whose selfish expectations did not align with our selfless vision, have exited our party.

31. We now have a party of strong and patriotic individuals who are ready, willing and able to continue on this journey of building a strong, secure, self-sufficient and corruption free Nigeria.

32. I am honoured today to receive this nomination form which your members, from all over the country, contributed to buy. It is a gesture from an association of patriotic Nigerians, which I was made to believe comprises over three million members that believe in our principle of bringing the desired positive CHANGE in Nigeria.

33. Since my protest at the APC secretariat a few weeks back on the very expensive cost of the presidential nomination form, I have received many offers from different associations and organisations whose members were ready to pool their resources to buy me the form.

35. I am very touched by these gestures. And I want to assure you all that my commitment to our CHANGE agenda is as strong as ever.

36. As I accept this nomination form from NCAN today, I want to ask all the other groups who have offered to buy my nomination form to redirect their contributions to the Not Too Young To Run wing of the APC.

37. Nigeria is blessed with many talented and visionary youths who have a lot to contribute. Many of them may not be able to afford the nomination fees set by our party. Your contributions will go a long way in supporting the next generation of leaders.

38. I therefore would request that remaining funds raised to buy my presidential nomination form be used to support these young, competent and dynamic future leaders.

39. Once again, I thank you very much for this donation as I pray to God to give us all the strength and wisdom to continue to deliver our promises.