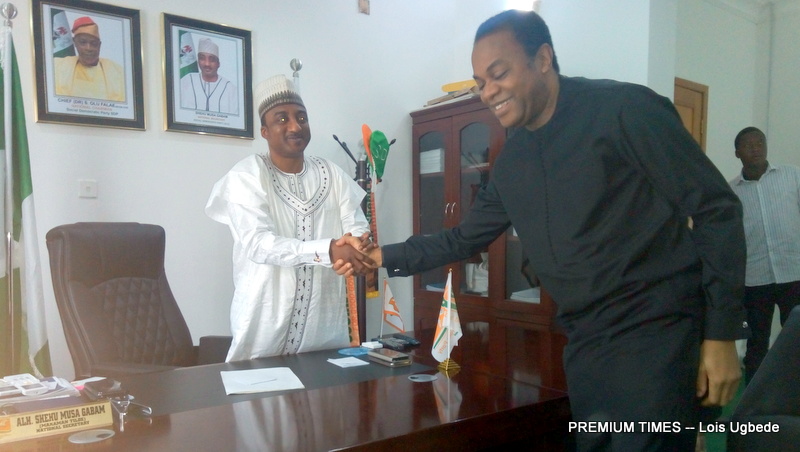 Donald duke and the national secretary of the party

Why I dumped PDP – Donald Duke

Former Cross River State governor, Donald Duke, on Friday said he joined the Social Democratic Party (SDP) to run for the office of president in the 2019 election because his former party, the Peoples Democratic Party, had “unconstitutionally” zoned political offices.

In a series of tweets, Mr Duke, who submitted his nomination form at the SDP secretariat on Friday, said his decision came after ”deep reflection and candid assessment of the Nigerian polity”.

Condemning zoning of political offices, Mr Duke said it remained unconstitutional, ”as it limits the choices we have as a country to a section of the country”.

“As rational as they may see it, it remains unconstitutional and there are not enough strong voices out there speaking up objectively. Besides, democracy is all about choice, how then do we limit the choices we have to some section of the country or the other?

“Can we under such aegis obtain the best? Nigeria can only be whole when the sum total of its parts are able to contest freely and at will for the highest office in the land,” Mr Duke tweeted.

In addition, Mr Duke disagreed with those who say that only two political parties have the physical presence nationwide to win the presidency in a general election.

He said he hopes his participation would enrich the playing field and offer Nigerians wider options.

“Some folks have espoused that only two parties have the physical presence nationwide to win the presidency in a general election. I disagree. Our fate as Nigerians should not be determined by two underperforming platforms, but rather by we ourselves.

“By joining the race on the platform of the SDP, I hope my participation enriches the playing field and offers Nigerians a wider berth of options other than a zero some playing field of either the APC or the PDP,” Mr Duke said.