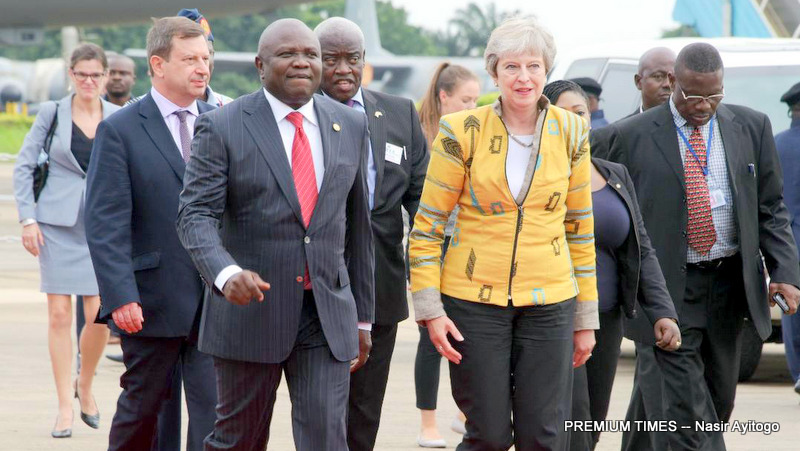 Gov. Akinwumi Ambode of Lagos State leading the British Prime Minister, Theresa May during her arrival on a courtesy visit to the Governor in Lagos on Wednesday (29/8/18). 04699/29/8/18/Supo Olosunde/BJO/NAN

The British Prime Minister, Theresa May, on Wednesday afternoon arrived the Murtala Muhammed Airport (MMA), Ikeja, as part of her visit to Lagos State, where she is billed to spend time with victims of modern slavery during her brief stay in the nation’s commercial hub.

The News Agency of Nigeria (NAN) reports that the UK prime minister arrived at exactly 4.18 p.m. at the Presidential Wing of the Murtala Muhammed Airport, aboard an aircraft of the Royal Air Force.

Governor Akinwunmi Ambode of Lagos State, accompanied by his deputy, among other state officials, had earlier arrived at the presidential lounge, MMA to receive the prime minister.

Also on ground at the airport were the top echelon of the Nigeria Police Force, the Federal Road Safety Corps, the Nigeria Customs Service and the Nigeria Immigration Service.

Mrs May had earlier arrived in the country and met with President Muhammadu Buhari at the New Banquet Hall of the State House in Abuja.

Nigeria and Britain also signed two agreements on Defence and Security partnership as well as Economic Development Forum before she headed to Lagos.

Mrs May’s visit to Nigeria is part of her tour of some Africa countries.

The Prime Minister on Thursday is expected in Nairobi, where she will meet President Uhuru Kenyatta and see British soldiers training troops from Kenya and other African countries in the techniques needed to identify and destroy improvised explosive devices before they go to fight Al-Shabaab in Somalia.

The prime minister is on a trade mission in an attempt to bolster Britain’s post-Brexit fortunes. This is her first visit to Africa since she became Prime Minister in 2016.

She is accompanied by a 30-man business delegation as part of her efforts to “deepen and strengthen” partnerships around the world as the UK prepares to leave the European Union (EU) next year.

APC at liberty to use direct or indirect primaries – Ambode