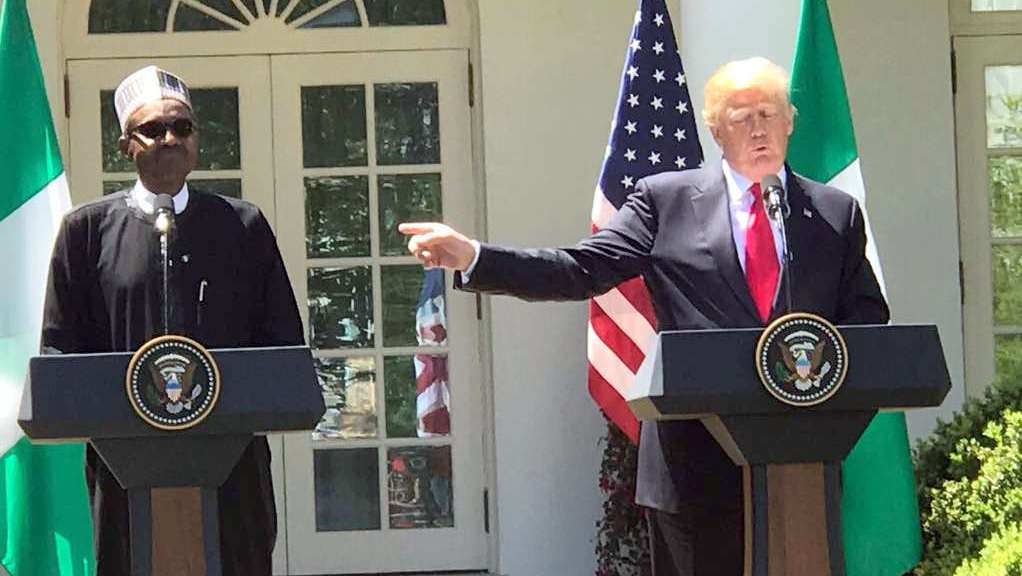 File photo of President Muhammadu Buhari's visit to President @realDonaldTrump in the Oval Office and Press Conference in the Rose Garden.

The Pan-Yoruba socio-political organisation, Afenifere, says it believes Nigeria needs a strong and healthier president to run its affairs for the next four years from 2019.

Yinka Odumakin, the National Publicity Secretary of the group, stated this on Monday against the backdrop of a statement credited to the U.S. President, Donald Trump, that his meeting with Mr Buhari sometime in April was “lifeless”

An article published in Financial Times said Mr Trump told his aides after the meeting that he never wanted to meet a person “so lifeless again.”

“The US President may have some issues, but on this one, he is right,” Mr Odumakin told PREMIUM TIMES on the phone.

He said Nigeria is certainly one of the important nations of the world and would not be doing well to have Mr Buhari, who has a history of medical vacation abroad, to manage her sundry challenges beyond 2019.

“If the health of our President is in such a state for the President of America to make such comments about his health, it shows clearly that if there is love for the country, the president should at the end of this four years, retire to his home and go and take care of his health and wanting to inflict another four years on this nation.”

Asked why he would trust Mr Trump’s judgement given the latter’s disrespect for leaders, Mr Odumakin said Nigerians did not need the U.S. president’s comments to know the true state of affairs with Mr Buhari.

He added that the various medical vacations to London clearly showed that there was something wrong.

The group also disagreed with critics that President Buhari was unfit to run for the 2019 elections and to oversee the affairs of the country in the next four years.

The chairman of the group, Niyi Akinsiju, said on Monday that it was not the first time the U.S. President was heard to make such derogatory remarks at world leaders, noting that Mr Buhari would not be distracted by the latest comments from the U.S. leader.

“We are aware that President Trump’s disrespect for World leaders is not new; his comments on Canada’s Prime Minister, Justin Trudeau, calling him ‘meek and mild’; his reference to Germany’s Leader, Angela Merkel’s actions as ‘insane’, or his outlandish Tweet at the UK’s Theresa May, and more recently, the alleged remarks he made after meeting President Buhari,” Mr Akinsiju said.

“It is indeed not the first time President Trump would be heard to lower the standards of respect for his colleagues on the world stage.

“We are not surprised; we know that this age-long character of the U.S. President would not change anytime soon. But it is important that we put it on record that President Buhari remains fit and sprightly, even for the next decade.”