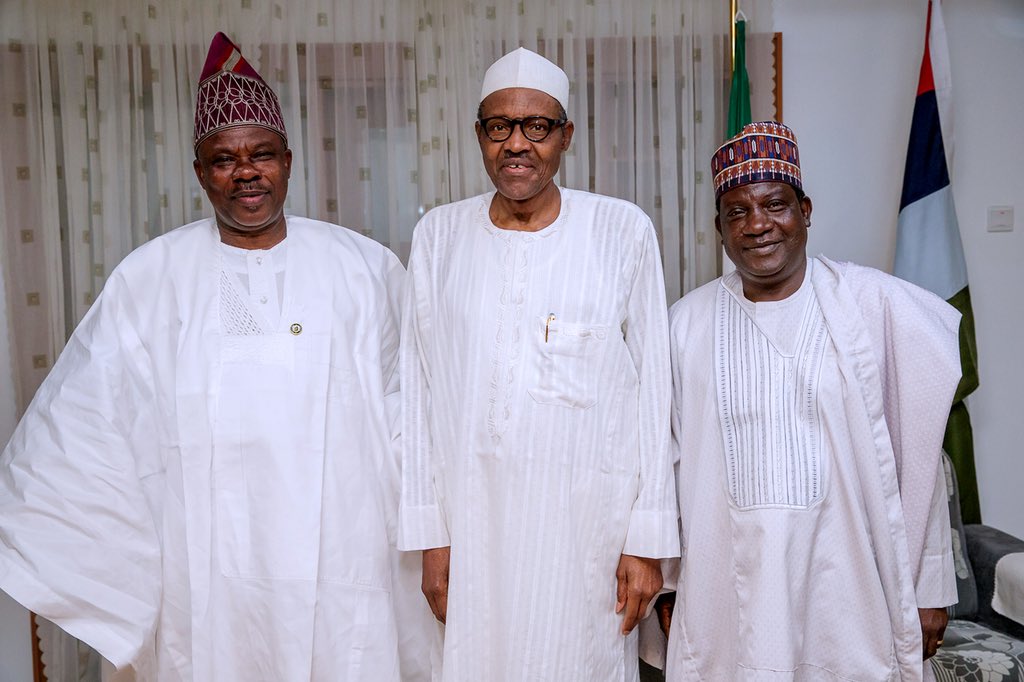 The News Agency of Nigeria (NAN) reports that the governors and Mr. Kalu met with the president separately behind closed-doors at the president’s private residence.

Speaking to newsmen after the meeting, Governor Amosun said he was in Daura to greet the President in the spirit of the Sallah celebration.

He said: “It is just part of what we should do during celebration like this – to come and just say `hello’ to our leader.

“People are waiting for me back home, they have been with me since day before yesterday, throughout yesterday, early this morning and I had to sneak out to come and just say `hello’ to Mr President.’’

The governor, who described Ogun state as “almost a one party state,’’ reassured that the All Progressives Congress (APC) would record impressive electoral results in 2019 general elections, in spite of the reported cases of defections by politicians in the state.

Governor Lalong, who also spoke on his visit to Daura, said he used the opportunity to share the Sallah festivities with President Buhari and the Daura Emirate Council.

“This is my first time of spending Sallah (holiday) in Daura and so I used the opportunity to do Sallah with Mr President in Daura and also to enjoy some good meats.

“I also used the opportunity to do Sallah with the Emir of Daura because the Emir is like a father to me,’’ he said.

The governor enjoined all Nigerians to come together and promote the virtues of unity and peaceful co-existence, and to always avoid acts capable creating socio-political unrest in the country.

He expressed satisfaction with the current security architecture put in place in the state.

Former Governor Orji Kalu, who also spoke to newsmen after the closed door meeting with the President, called on Nigerians to continue to support the Buhari administration to enable it deliver on all its promises to the citizens.

Mr. Kanu, who was turbaned as ‘Danbaiwan Hausa’ by the Emir of Daura, Farouk Umar, lauded President Buhari for implementing programmes and policies aimed at transforming the nation’s economy for the good of all citizens.

NAN also reports that President Buhari met behind closed door with all his family members from within and outside the state at his residence in Daura on Wednesday.