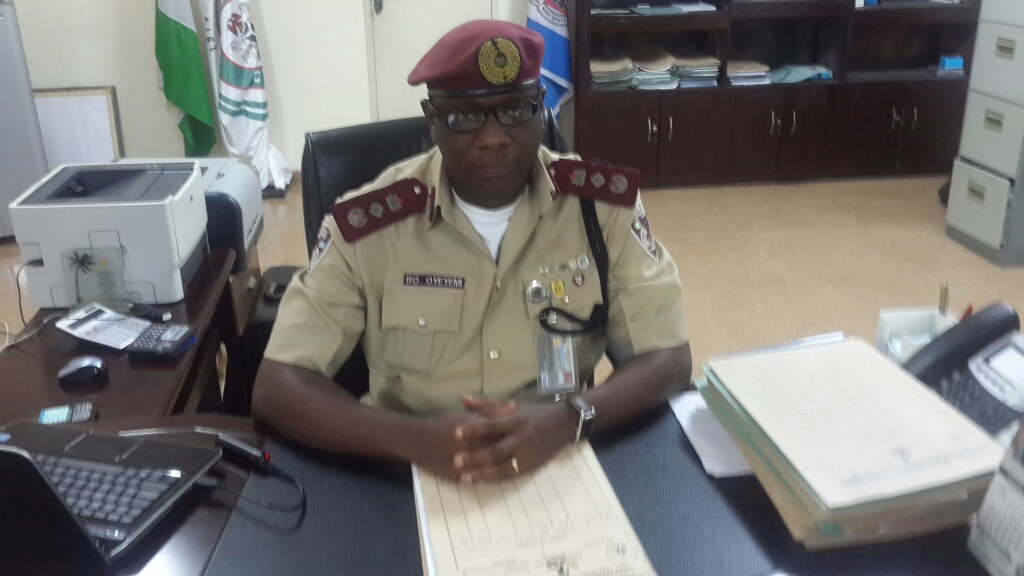 In a statement issued Saturday and signed by Bisi Kazeem, the FRSC spokesperson, the corps noted that all operational lapses highlighted in the reports do not enjoy the support of the corps.

The FRSC spokesperson added that the corps would punish all misconducts proven against its personnel.

“The attention of the Federal Road Safety Corps has been drawn to a story published on 21 July and 15 August, 2018 in Premium Times on alleged drivers’ licence fraud in some states of the country,” the statement read.

“While the Corps appreciates Premium Times and the Nigerian media in general for their contribution to road safety management in the country, we like to state clearly that the operational lapses and misconducts exposed in the reports do not enjoy institutional backing.

“There are lots of great, honest and committed officers and men in our Corps. But like all human institutions, the FRSC will not lay claim to perfection. There are perhaps a few personnel who appear to have failed to key into the uncompromising anti-corruption regime put in place by the leadership of our organisation.

“But this Corps, reputed widely for its transparency, integrity and unrepentant stand against corruption, is determined to severely punish all misconducts proven against its personnel. As is well known within and outside this organisation, the Corps Marshal, Dr Boboye Oyeyemi, has never wavered in showing good examples and in ensuring that corrupt personnel are tried and dismissed from service.”

The two-part investigative report exposed how, with the grand collusion of touts, agents and officials of the FRSC, VIO and MVAA, many Nigerians obtain driver’s licences without going through the approved processes.

The report also exposed how the institutionalised fraud frustrates many Nigerians who are eager to go through due process in Lagos, Ogun, Kwara, Oyo and other parts of the country.

Mr Kazeem, in his statement said the Corps Marshal “treasures the Nigerian press for being the watchdog of the society and appreciates their resilience, tenacity, objectivity and contributions to stability and good governance particularly at this time in the history of our beloved nation”.

Reacting to the publication by PREMIUM TIMES, Mr Oyeyemi also said: “We have noted the issues raised by the publication. We will investigate the allegations made against our personnel and take decisive actions. Already, drastic measures are being instituted to nip in the bud the identified mischiefs being perpetuated by some tendentious driving schools across the country.”

The Corps Marshal, the statement said, equally encouraged the media to continue to expose wrongdoing as this will help redirect the wheels of governance in the country.

“Let me also encourage the media to endeavour to always stand on the path of truth, justice and unbiased reportage especially when it concerns matters relating to irregularities of operatives and other stakeholders in the Corps,” the statement quoted Mr Oyeyemi as saying.

He added that despite the challenges confronting the Driving School Standardisation Programme and the National Drivers Licencing Scheme processes, the Corps remains resolute in its fight against corruption and “will continue to wage war against indiscipline within its system and among its stakeholders”.

The statement said some of the issues raised by the articles were already receiving attention, adding that recently, the corps ordered an investigation into reported sharp practices involving 124 indicted driving schools.

“As a way of putting the nation’s driving schools on the path of sanity, the Corps, between 04 July and 07 August, 2018 organised national workshop for driving school operators in four locations across the country. The locations are: Ibadan (July 4, 2018), Kano (July 23), Owerri (July 30) and Abuja (August 7). Of the total 1450 registered driving schools in the country, 919 participated in the workshop,” Mr Kazeem said.

“At the workshops, some action plans were agreed upon to address sharp practices by driving schools operators. These action plans are currently being implemented across the country.“The Corps also recently organised a workshop for Sector heads of Driving Licence Centres to discuss measures for authenticating driving school certificates, learners permit through driving test and visual acuity test of applicants.

“The highlight of that workshop, held August 1 in Abuja, was a stern warning by the corps marshal to personnel to desist from nefarious practices capable of tarnishing the image of the Corps or endangering safety on our roads.”