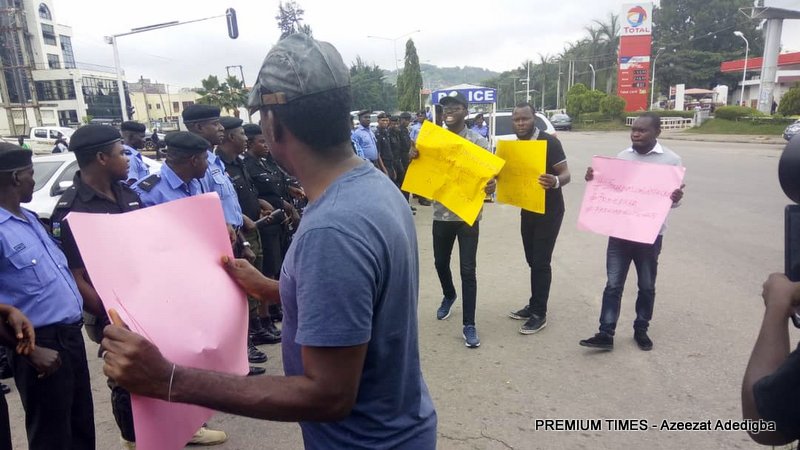 Protesters on Friday gathered at the Nigerian Police Force headquarters in Abuja to demand the release of detained PREMIUM TIMES reporter, Samuel Ogundipe.

The groups which include Nigerian activists, civil society leaders and journalists held the first day of protest on Thursday,

The demonstration led by the #TakebackNigeriaMovement and the #OurMumuDonDo, held in front of the police’s Louis Edet House headquarters in Abuja.

At about the time the protesters gathered on Friday, Mr Ogundipe was granted bail by a magistrate court in Kubwa, and was consequently released, information later brought to the attention of the protesters.

The police already deployed armed officers to check the protesters, forming a shield around them

The National Secretary of #OurMumudondo, Adebayo, who was first to arrive the protest ground on Friday, said “whether the representatives of NUJ are here or not, we will continue to protest for his release because he is a Nigerian.”

Mr Adebayo started the protest alone while waiting for others.

The convener of concerned Nigerians, Deji Adeyanju, said the protest will continue everyday till Mr Ogundipe is released.

Mr Ogundipe, who covers the security beat for PREMIUM TIMES, was arrested on Tuesday by the police and secretly arraigned at a magistrate court in Abuja on Wednesday without access to his lawyer.

The police want Mr Ogundipe to disclose his source for a story, a demand that goes contrary to ethical journalism.

The police spokesperson Jimoh Moshood, while addressing the protesters on Monday said no journalist has a right to access and publish classified documents, notwithstanding the Freedom of Information Act.

The editor-in-chief of the newspaper, Musikilu Mojeed, and education reporter, Azeezat Adedigba, were also briefly held by the police’s notorious anti-robbery unit, SARS.