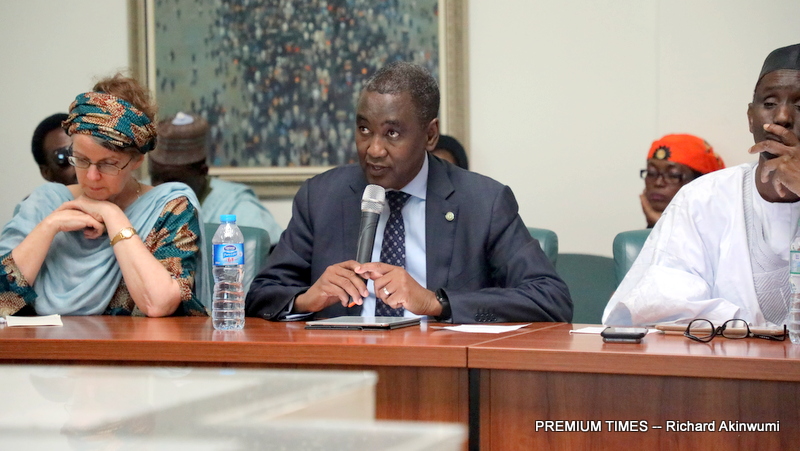 Tears as NBA President, others pay tribute to Raufu Mustapha

The president of the Nigeria Bar Association, Abubakar Mahmoud, and his daughter, Hauwa Mahmoud, on Wednesday broke down in tears while eulogising the late Abdul Raufu Mustapha.

Mr Mustapha, who edited two books published under the flagship of PREMIUM TIMES books, was until his death in 2017, a Professor of African Politics at Oxford University.

The books – Sects & Social Disorder and Creed & Grievance, was unveiled at the Shehu Yar’ adua Centre, Abuja on Wednesday.

Mr Mahmoud in a tribute to his friend at the unveiling, described Mr Mustapha as a ‘unifying figure.’

He traced the beginning of their relationship to 1971 when Mr Mustapha and some other friends used to shield him from bullies at the Federal Government Sokoto.

“There is nothing I will say about the life of this incredible person that has not been said or written about by his multitude of friends, colleagues and indeed family. Nevertheless, like many of you here, I was privileged to call Raufu a friend.

“Since I knew Raufu, till the very last minute on August 8 2017, when I had the extra-ordinary privilege of being by his death bed, along with Kate, his widow, two children and another friend, Prof. Kamal Adeleke, I prayed for him as he peacefully drifted away.”

Mr Mahmoud recounted how he had to cancel important engagements to be with Mr Mustapha on the sick bed shortly before his death.

He said he had to ‘rush down’ to Lagos from Kano to catch the next flight to London when informed that his friend is in critical condition.

Upon reaching London, he realised Mr Mustapha’s condition was fast deteriorating though he was hopeful of a recovery.

At this point, the NBA President broke down in tears and could not continue with the speech.

After about half a minute sombre moment, he called on his daughter, Hauwa, to continue the speech. But it only took Ms Hauwa few minutes of braveness before also breaking down in tears.

In the tribute, he described Mr Raufu as a ‘very devoted Muslim’, a friend who will always look after others.

“Raufu was special to many people and families. His love, affection and support for the friends and family members, bringing people together, repairing relationships. It was incredible that he had left the border practically since 1996 yet he maintained good relationship with us.

“Every time he spent in Nigeria during his numerous visits was carefully balanced between his academic work, field work, interview with people for numerous research works and he visited family and friends across the country.”

He said Mr Raufu’s ‘sharp intellect and understanding has, in many times, put discussions in right perspective.’

On his part, the first executive chairman of the anti-graft EFCC and a former presidential aspirant, Nuhu Ribadu, said Mr Raufu is always honest to whatever he believes in.

He spoke on the content of the books, saying some of the practices and experiences the almajiri schools pupils go through in Northern Nigeria border on human rights abuse.

Mr Ribadu said children from the almajiri schools easily fall victims in the event of violent conflicts, citing such conflicts in Kaduna, Zangon Kataf, among others.

“I worked on many of those crises and conflicts as a member of the investigation team and tribunal, I was in Zango Kataf, I was in Tafawa Balewa, I was in Kaduna religious crisis,” he said.

“During the Kaduna religious disturbance of 2000, we visited where they buried the victims along Birnin Gwari road, they opened the graves for us, what I saw is still haunting me. There were bodies, all of them young boys, no girl, boys over 100 buried in mass graves and no identity, not a single one of them had a name and they were all buried, I got interested in this.

“I said, let me see and get in touch with those who are responsible for it. They were victims of the crisis that took place in Kaduna because of the Sharia riots. They said they did not have their identity or Mallam responsible for them? They said no. Did anyone come to complain that they have lost a child?” he said.

In his remarks, the Bishop of Sokoto Catholic Diocese, Mathew Kukah, called for tolerance, lamenting that brushing critical issues aside was not the panacea to conflicts in the society.

He said northern Nigerians should work towards coming to terms with issues around ethno-religious differences between them, which will help in ending violent conflicts.

The bishop also attributed the recurring conflicts to inability of persons in authority to resolve the burning issues for lasting peace.