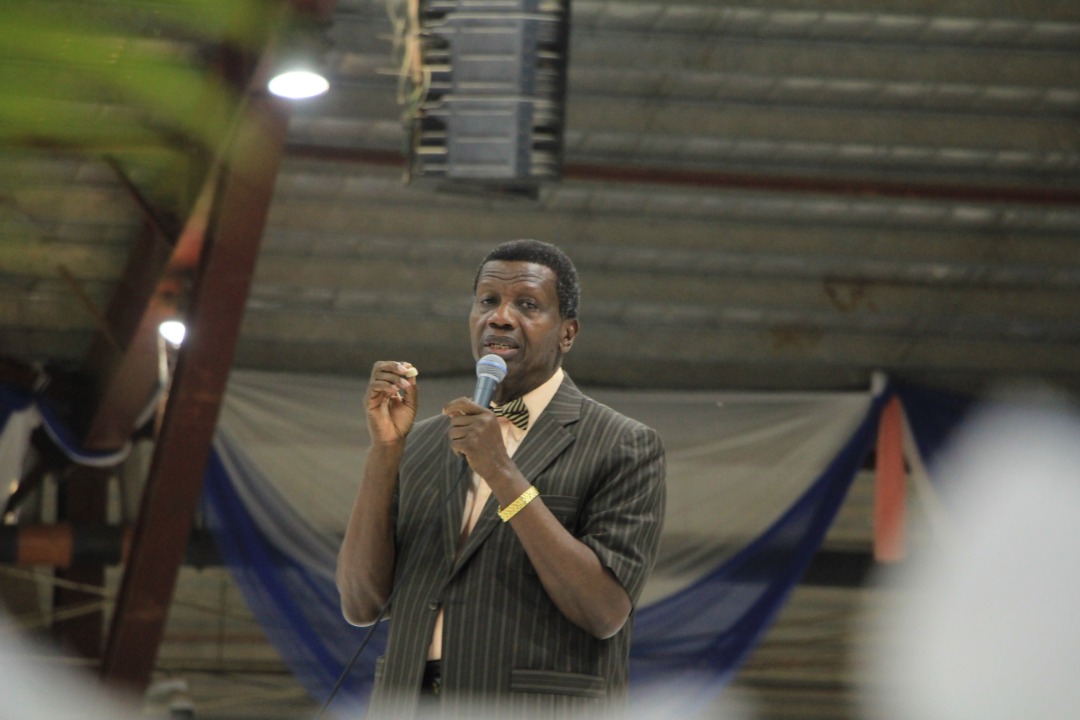 Pastor Enoch Adeboye of the Redeemed Christian Church of God

What struck one first at the 66th Annual Convention of the Redeemed Christian Church of God (RCCG) on Friday was the massive attendance – a sea of heads everywhere at the Redemption Camp.

Everywhere one turned there were lots of people, with yet more people flooding in.

Confirming that, Enoch Adeboye, General Overseer of the church, announced that there been plans for the church’s pastors to lay hands on members of the congregation towards the end of the programme but with the number of people in attendance, the exercise was not possible. It was postponed to 11am on Saturday.

With both auditoriums full, estimated attendance appeared to be in millions.

Yet there was no incident throughout the programme and the Camp was kept neat – no thrash around and no dump sites.

The massive flow of people was also noticeable during the call on mothers who had been blessed with the fruit of the womb through prayers at the church to take their babies to the altar for blessings.

For about 10 minutes, mothers carrying their babies proudly and dancing, poured in from various angles of the auditoriums to the altars. Soon, pools of heads formed at the altars.

“When you consider that in all these homes there used to be crying every
month but now there is joy, join me to rejoice with them,” Pastor Adeboye said.

“You know how much I love children, but my wife loves them more.”

Then he let out a secret. “My wife wanted 12 children but we had to stop somewhere. Now we have many spiritual children (the name he calls church members, who in turn call him Daddy).”

It was also interesting that people choose to be at the Old Auditorium to participate in the service via large screens, when the event was live at the New Auditorium, some few about 2 kilometres away. That may have saved the new Auditorium from being overwhelmed.

Also, many more people participated from viewing centres in parishes or branches of the church in 197 countries.

There is the general in the belief in the church that you don’t have to be touched or seen physically by Pastor Adeboye to receive God’s blessing through him.

For example, he doesn’t touch mantles. He mostly blesses handkerchiefs, which many people claimed they in turn used to perform miracles. He only prays from the pulpit as people at the auditoriums, viewing centres, and even homes, wave their handkerchiefs.

On Friday, after people gave testimonies of using the handkerchiefs to cure stroke and raised a woman from the dead, Pastor Adeboye blessed more handkerchiefs.

Towards the end of his sermon , he asked for handkerchiefs to be waved as he prayed ‘in the spirit’.

A lady from Rivers State, Amaechi Florence, had earlier testified how in 2016 her elder sister suddenly dropped dead but after praying for her with one of the handkerchiefs blessed by Pastor Adeboye, she came back from the dead.

“When she did, she started behaving abnormally and I knew the devil had not finished its work, but with more prayers my sister regained her sanity.”

Other testimonies included those of many couples who were barren for between 10 and 20 years but proudly showed their children at the service.

The night started with an opening prayer by Pastor JA Obayemi, national overseer of RCCG.

Praise and worship songs, lively sessions of the church’s programmes, followed.
The first sermon of the night was preached by Pastor Joe Olaiya, known by most people as the only pastor, who makes an altar call when Pastor Adeboye is at a Service. When he did on Friday, there was another massive flow of people, who rushed to give their lives to a Christ.

Preaching a simple but profound sermon the harm of sinful life earlier, he showed how sin ruined God’s covenant with man for him to have dominion, and how righteousness could restore it.

“Sin dominates people and puts them down but righteousness bring up a man.
Love God, obey His instruction, serve Him that is your own duty. God own duty is to lift you up,” he said.

“Why don’t you lift your hands to the most high God and begin to bless His holy name, worship the most high God, He is worthy to be praised, He reigns forever, He is the Almighty God, He never gets old or get tired, He never sleeps nor slumber, when He speaks it is done, Let’s praise His name together, there is no one like Him,” Pastor Adeboye begun his sermon, which was one of the many high points of the night.
While on his knees at the pulpit praying, he shared some prophecies, indicating that it was also a night of prophecy.

He took time to explain some examples of dominion – physical, financial, spiritual.

Physical Dominion: It is good to be healed, (Mark 1:40-45) but it is only those who have been sick that will know the value of healing. It is better to be healthy and not to be sick at all, and it is better still for you to be the one healing the sick, (Mark 16:17-18). But when your shadow begins to heal the sick then you have dominion physically.

Financial Dominion: It is good to be rich. Abraham our father was rich (Genesis 24:34-35). Abraham is the father of faith, God blessed Abraham greatly. But it is better to be wealthy, (Genesis 26:12-14). But it is better than been wealthy to prosper, you begin to have dominion financially when you flourish, (2 Chronicles 7:5).
When do we say you have dominion financially? When you can do what you want to do without looking for help. That level where you reach that anything you want to do, you don’t need anybody’s help, that’s financial dominion.

Mr. Adeboye also explained that, like Naaman, a powerful Syrian commander, who suffered from leprosy, one could have dominion in one area and be under yoke in another area.

He gave a testimony of when as a new general verseer at the Redemption Camp years ago he didn’t have two Naira to pay at the toll gate to go to Lagos. He didn’t have financial dominion.

He however said God has made provision for comprehensive dominion, a situation in which one has great dominion over everything, including Satan and his hosts.

He gave the example of Elisha, who had all round dominion.

He advised that all it takes to have Comprehensive Dominion is for one to surrender completely to the one who is in charge of dominion – God.

The convention continued with a Communion Service on Saturday, when pastors in the 197 countries, where the church has branches, were honoured. They came out as their names were called to be decorated and congratulated by Mr. Adeboye. Additionally a wall of honour is to be erected at the Redemption Camp for them.

Among the countries from where pastors came were Libya, Sudan, Afghanistan, Cambodia, UAE, India, Samoa, Nicaragua, UK, and USA.

As at Saturday evening, 99 babies – 50 girls and 49 girls- had been born in the church’s medical facility at the Camp.