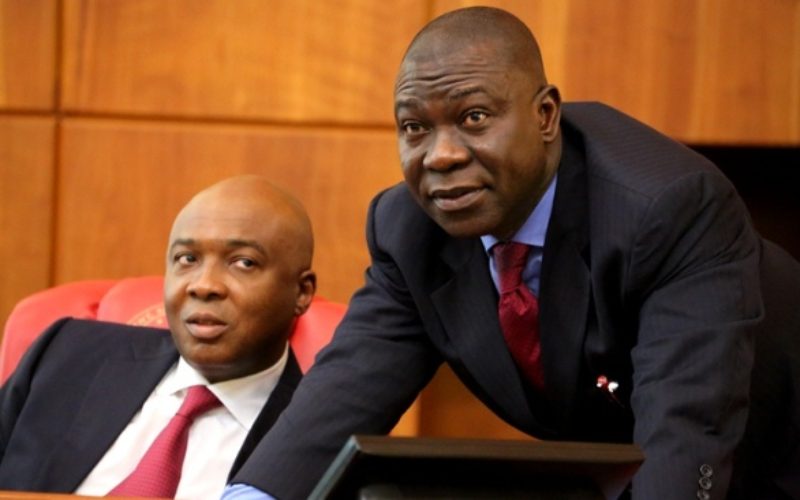 Senate President, Bukola Saraki, and his Deputy, Ike Ekweremadu, have accused the presidency of planning to implicate them and other members of the Peoples Democratic Party (PDP) over Tuesday’s invasions of the National Assembly by officers of the State Security Service (SSS).

In a joint statement signed by their media aides, Yusuph Olaniyonu and Uche Anichukwu, they said the Presidency has constituted a closet panel to review the interim report submitted by the Inspector-General of Police (IGP), Ibrahim Idris, and submit a final recommendation that implicate them and their colleagues.

The IGP had in a preliminary report to the Acting President, Yemi Osinbajo, accused the former DG, SSS, Lawal Daura of gross violation of Nigerian Constitution in Tuesday’s barricade of the National Assembly by SSS operatives.

Mr Idris said Mr Daura was working for some politicians for selfish interest, but did not name the accomplices, and that he (Mr Daura) did not consult with other security agencies before ordering the siege.

The interim report questioned the validity of a security report that allegedly anticipated violence at the parliament.

Mr Daura was sacked by Mr Osinbajo on Tuesday afternoon. He was immediately handed over to the police for further interrogation over unathorised deployment of SSS officers.

The ruling All Progressives Congress (APC) defended Mr Daura’s action, saying its findings indicated that the disgraced spy chief was trying to prevent violence which PDP lawmakers allegedly planned at the National Assembly.

Mr Saraki pushed back against the allegations at a press briefing Wednesday afternoon, describing it as an ‘insult’ on the collective intelligence of Nigerians.

He said it was baffling that he leaders of the parliament could be accused of being in bed with someone like Mr Daura, even when the parliament was also at the receiving end of the former spy chief’s unchecked recklessness

In their statement on Friday, Messrs Saraki and Ekweremadu alleged that the mandate of the closet panel being formed by the Federal Government is to turn facts on their head and blame the invasion of the National Assembly on the two leaders of the Red Chamber, “who will then be presented as having worked in tandem with the sacked Director-General of the DSS, Mallam Lawal Daura to stage the parliamentary security breach.”

“We have been reliably informed that instead of the Presidency to set up a public inquiry or judicial commission to probe last Tuesday’s early morning Invasion of the National Assembly as being demanded by the general public, they have commenced a process of manipulation and fabrication.

“The Presidency has set up a closet panel, which would work to a predetermined conclusion in which they will now claim that the Senate President and the Deputy Senate President worked in collusion with ex-DG of DSS, Lawal Daura to stage the invasion.

“They want to shield the fact that the previous night before the invasion and up till the early hours of Tuesday, there was a meeting of the All Progressives Congress (APC) senators and that the plan was for them to be moved in a coaster bus into the National Assembly complex later that morning for them to purportedly remove us and select a new Senate President and Deputy Senate President.

The duo said the plot of APC senators only failed because the media, particularly social media, Nigerians and international community responded very swiftly as some legislators who came into the complex were refused entry by gun-wielding, hooded security operatives.

“Now, they want to turn the facts on its head and blame us for their botched plot against democracy. We are hereby alerting all Nigerians and members of the international community that the present Nigerian government will stop at nothing to destroy, suppress and incapacitate the opposition. This is their new tactic and plot as we approach the period of the 2019 polls.

“We hereby reiterate our earlier position that the coup against democracy as represented by last week’s invasion must be probed through an independent judicial commission of inquiry which will produce a comprehensive report. We reject any manipulated and fabricated investigation,” they said.

The presiding officers added that they have also uncovered a sinister plot in which the government plans to use the anti-graft and security agencies to incarcerate them and some members of their families from next week, all in a bid to break their will and effect their removal.