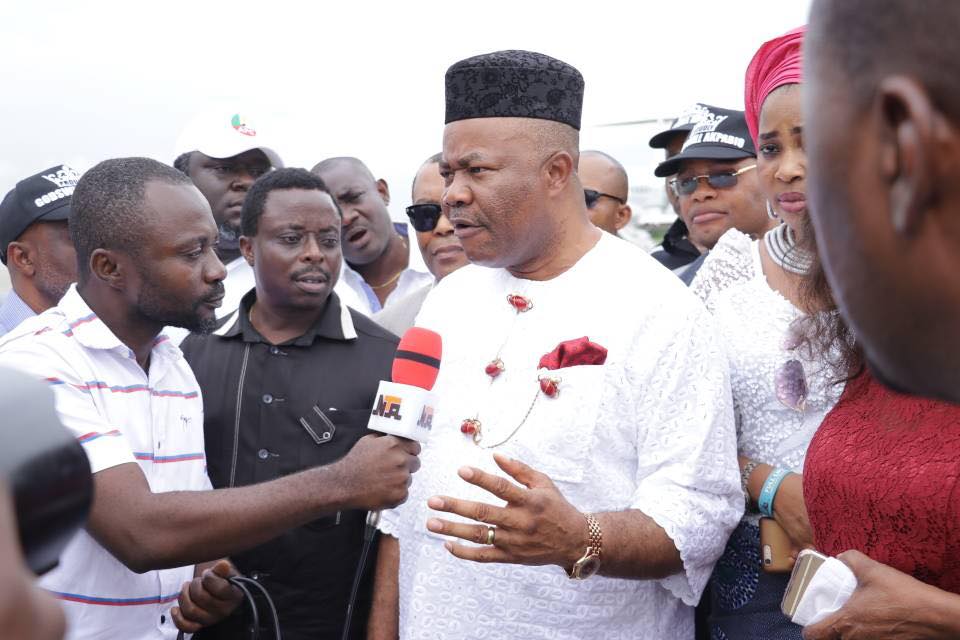 Godswill Akpabio has formally defected to the ruling All Progressives Congress (APC) at a mega rally held at the Ikot Ekpene township stadium on Wednesday and declared that he is taking the state to the centre.

No fewer than 30 APC senators and members of National Working Committee (NWC) were on hand to receive the ex-Senate minority leader, Mr Akpabio.

The Senate Majority Leader, Ahmed Lawan, who introduced his colleagues, spoke on Mr Akpabio whom he described as a nationalist and patriot who believes in Nigeria’s unity.

He said: “This defection surpasses all other defections.

“This is a defection that has shaken the opposition Peoples Democratic Party (PDP).

“They followed Akpabio everywhere to prevent him from defecting but he ignored them.’’

He said Md Akpabio is a nationalist who believes in the administration of President Muhammadu Buhari.

The crowd that witnessed the defection at Ikot Ekpene township stadium on Wednesday was huge.

The National Women Leader of APC, Salamatu Umar, described the crowd as unprecedented.

“Nigerian women are proud of Akpabio,” she said.

She praised Mr Akpabio for the transformation that has taken place in Akwa Ibom.

Fifty five-year-old Mr Akpabio is a lawyer and politician who was also Governor of Akwa Ibom State of Nigeria from May 29, 2007 to May 29, 2015.

In 2002, he was appointed Honourable Commissioner for Petroleum and Natural Resources by the then Governor Obong Victor Attah in Akwa Ibom State.

Between 2002 and 2006, he served as a commissioner in three key ministries: Petroleum and Natural Resources, Local Government and Chieftaincy Affairs, as well as Lands and Housing.

In 2006, he aspired for the governorship of Akwa Ibom State in a hotly contested primary election and defeated 57 other aspirants to emerge the candidate of the People’s Democratic Party (PDP).

His campaign with the slogan, “let God’s will be done” received mass support and he was elected governor in 2007.

He was re-elected for a second term in office as governor of Akwa Ibom State in 2011.