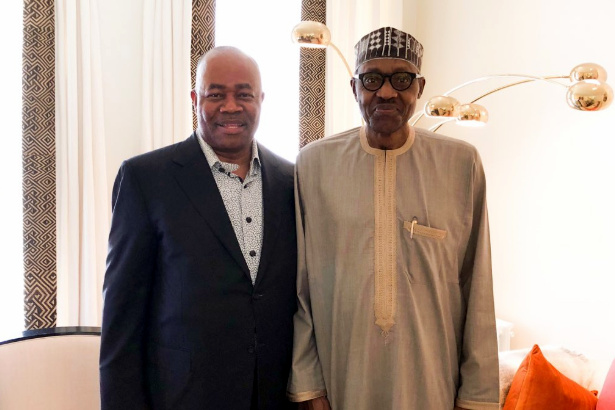 The National Chairman of the Peoples Democratic Party, PDP, Uche Secondus, has condemned the Tuesday siege on the National Assembly by officials of the State Security Service (SSS).

He also asked the United Kingdom to expel President Muhammadu Buhari from the country, alleging that the Nigerian leader planned the siege from there.

Mr Buhari is currently in London on vacation.

PREMIUM TIMES reported how the UK earlier said it was monitoring the situation in Nigeria and advised on respecting the rule of law and democratic principles.

The PDP chairman accused the president of hiding in that country to plan the undermining of democracy in Nigeria.

Security officials, mainly from the SSS, on Tuesday prevented lawmakers, staff and journalists from gaining entrance to the National Assembly.

The siege was only lifted in the afternoon, several hours after it began. During the barricade, lawmakers were eventually allowed in while other categories of people were barred.

The incident, believed to have been planned to remove Senate President Bukola Saraki, led to the sack of Director General of the SSS, Mamman Daura, by Acting President Yemi Osibanjo.

Mr Secondus in his statement said the UK should not allow its environment be turned into a haven for anti-democracy conspirators.

In the statement signed by his media aide, Ike Abonyi, Mr Secondus said the final plan for the invasion of National Assembly was made when the outgoing Senate minority leader, Godswill Akpabio, visited the president in London at the weekend.

PREMIUM TIMES reported the visit of Mr Buhari to Mr Akpabio. The latter is expected to formally join the APC on Wednesday, but has resigned his position as Senate minority leader.

Mr Osinbajo sacked Mr Lawal and also said the siege was not authorised by the presidency.

“When an executive arm in a democratic setting muscles up other arms of government, the correct name for such administration is autocracy and dictatorship,” Mr Secondus said.

“Nigerians and international community have continuously watched this administration, harass and intimidate the legislature and judiciary as well as others in opposition in their bid to create a dictatorial regime.

“All over the World, the parliament is the bastion of democracy and rule of law anybody not willing to alien himself to them is trying to create anarchy in the land,” he said.

The opposition leader than called on President Buhari to resign.

“We are aware that when a regime exhausts idea of what to do and loses the legitimacy that brought it to power, it could be dangerous like a bull in China shop. But truth is that Nigeria will survive this regime and laugh last.”

Germany tests solar car which charges as being driven