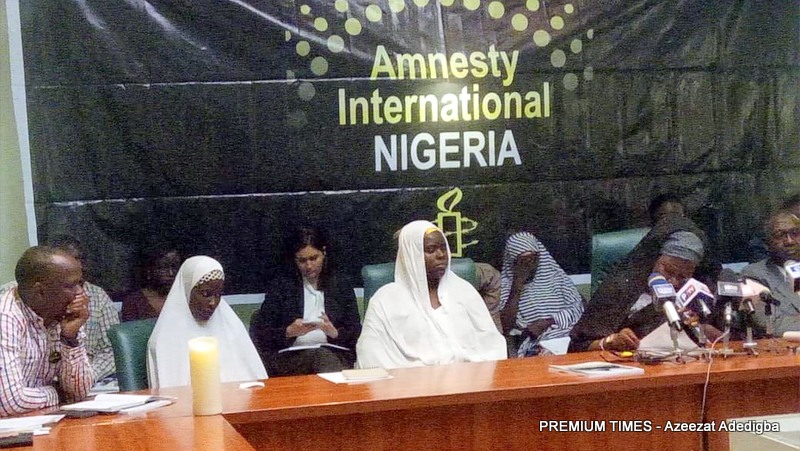 Amnesty International has accused the Nigerian military of resorting to threats and intimidation to discredit its work.

The global rights group said this on Thursday in a statement by its Media Manager, Isa Sanusi. It added that it would not be intimidated and would remain focused on its task.

Amnesty International made reference to sponsored protests in Abuja against its publications and its work of protecting human rights and highlighting abuses by relevant authorities.

A recent report by the organisation showed how soldiers raped Boko Haram victims in displaced persons camps. The military has denied the report as false, just as it denied previous reports.
“Rather than taking action to address the issues raised in this report, like investigating countless allegations of rape and other war crimes, the Nigerian military has fallen back on its usual hostile tactics of denials and threats,” said Osai Ojigho, Director of Amnesty International Nigeria.

Nigeria: Threats from the military won’t deter us from defending human rights

On 24 May 2018 the organization released a report, “They Betrayed Us”, which documented the prevalence of sexual violence against starving women and girls detained in satellite camps under the control of Nigerian soldiers and militia. The Nigerian military responded by organizing smear campaigns and issuing threats to “take action against Amnesty International.”

“Rather than taking action to address the issues raised in this report, like investigating countless allegations of rape and other war crimes, the Nigerian military has fallen back on its usual hostile tactics of denials and threats,” said Osai Ojigho, Director of Amnesty International Nigeria.

“Amnesty International always shares the findings of its investigations with the Nigerian military before publication. We ask detailed questions to ensure the military can provide its side of the story, but in all cases the military has either completely ignored these attempts to engage, or referred us to other arms of government, in a clear attempt to evade our questions.”

Amnesty International has described the decision today by the senate of the National Assembly to probe allegations raised in “They Betrayed Us” as a welcome development, and a sign of hope for victims seeking justice.

Amnesty International’s work in Nigeria goes far beyond documenting violations by the military. The organization has also released reports on the multiple horrific abuses carried out by the armed group Boko Haram, and human rights violations by the Nigeria Police Force. Amnesty International has also documented violent forced evictions by Lagos state government, and worked with communities facing forced evictions in Kaduna state and in the Federal Capital Territory, in both cases supporting the right to adequate housing. The organization has also highlighted ongoing pollution by oil companies in the Niger Delta, and for decades has been calling for accountability for the resulting environmental devastation.

According to our standard practice, Amnesty International’s reports on human rights violations in Nigeria call for investigations into the allegations they contain, but the Nigerian military has repeatedly responded instead with smear campaigns, intimidation, and threats.

For example, in 20 March 2017, sponsored protesters carrying a coffin invaded Amnesty International’s office in Abuja chanting slogans against the organization like “Amnesty International supports Boko Haram,” and “You are demonic, leave Nigeria now.” The protesters, some of whom said they were internally displaced persons from camps outside Abuja, were paid N1400 every day by agents of the sponsors of the protest who they met at Unity Fountain, Abuja.

On 23 May 2018, a day before the launch of “They Betrayed Us”, pre-emptive media smear campaigns and organized protests were carried out with the apparent aim of intimidating and harassing Amnesty. A Nigerian army spokesperson also repeated a previous claim that Amnesty International has an interest in prolonging the fight against Boko Haram.

On the contrary, Amnesty International has consistently highlighted how the cost of conflicts across Nigeria further erodes access to education, health and social services in the country, and has warned that impunity for abuses by all sides perpetuates a deadly cycle of violence.

“These diversionary tactics are a shameless attempt to avoid investigating the accounts of human rights violations which have been presented by Amnesty. The statements by the Nigerian military clearly show that they have not read our reports,” said Osai Ojigho.

“For example, while our recent report was based on remote satellite camps in places like Bama and Banki, the military took journalists to the wrong camps in Maiduguri in their attempts to prove us wrong.”

Amnesty International is a human rights organization and not a prosecuting agency – its role is to hold governments to their obligations to respect and protect human rights, and to ensure that anyone whose rights are violated has an effective remedy. That is why the organization continues to call on the Nigerian government to use its authority and resources to investigate all allegations of human rights violations and abuses, including of rape, torture, arbitrary detentions and unlawful killings, to ensure reparation for the victims, to hold the perpetrators accountable, and to ensure non-repetition of the violations.

“Despite the military’s best efforts, we will not stay silent. In the face of efforts to evade responsibility or to smear our organization, we will continue to raise our voices whenever and wherever we see injustice, sexual abuse, discrimination against women, or any other violations of human rights in Nigeria, said Osai Ojigho.