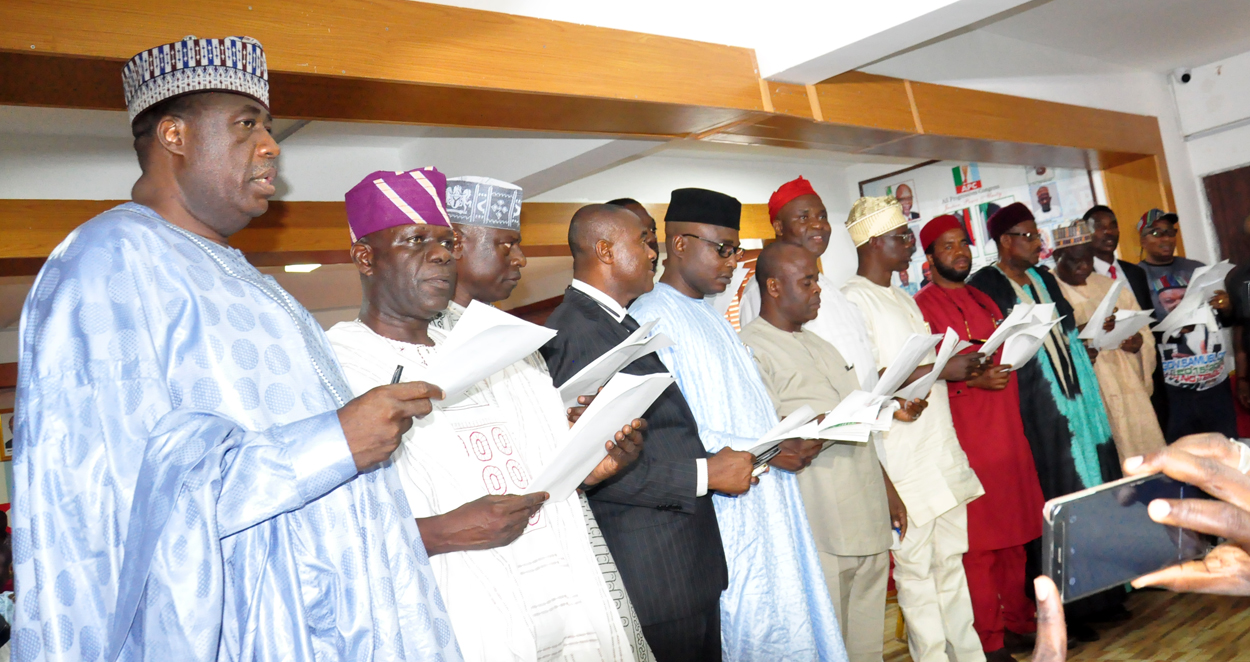 There was drama at the national secretariat of the ruling All Progressives Congress (APC) as factional state chairpersons and their supporters on Monday jostled for recognition at the inauguration ceremony.

The party had set the day for swearing in of state chairmen elected during the congresses which were characterised by violence and disagreement in most states, as factions held parallel congresses.

The National Publicity Secretary of the party, Bolaji Abdullahi, last week said the party was working on the reports of the various appeal panels on the conduct of the state congresses.

Speaking during the inauguration, the National Chairman, John Odigie-Oyegun, charged the state chairmen to return the party to its lost glory by projecting to Nigerians the successes of the APC-led federal government.

The chairman however, did not inaugurate the state chairmen of Lagos, Oyo and Delta pending when issues in those states are resolved.

“You have the onerous task maturing APC. You have to work hard to return the party to its lost glory. Also make sure you work hard for the reelection of our President.

“We are aware of conflicts, disaffection and bad blood in the party. Put all these aside and work for the victory of our party at the 2019 general elections.

“Go and tell the people of the great achievements recorded by the APC Government. Your Government is on the right course. A firm foundation has been laid for the development of Nigeria in spite of lean resources, the APC has achieved much in three years.

“Get acquainted with the achievements put together in a document which I will make available to you. Tell Nigerians the achievements of your government. In infrastructure; a lot of roads have been constructed, agriculture; much rice is produced, transport, rail is there and power we now have 7000 megawatts.”

Noting the need for reconciliation in states like Rivers, Taraba, Oyo, Delta, Lagos and others, he said he will set up a committee headed by the Deputy National Chairman (North) Lawali Shuaibu to study the situations in such states for possible actions.

“There is serious need for quick reconciliation especially in Rivers, Taraba, Oyo, Delta, Lagos and others. Let the chairmen here wait and should not inaugurate their executives like the others until the issues with the congresses in such states are resolved.

There will be concessions and harmonisations after the exercise within this week,” he said.