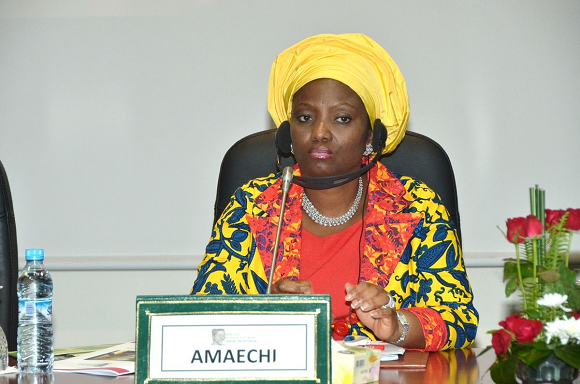 The Federal Airport Authority of Nigeria, FAAN, has claimed the incident at the Port Harcourt airport on Saturday had nothing to do with the wife of the minister of transport, Judith Amaechi.

The agency, supervised by Mr Amaechi, said those involved in the clash were security agents and aides. It did not give further details

PREMIUM TIMES reported on Thursday that Mrs Amaechi was at the centre of the melee on Saturday at the Port Harcourt International Airport.

The incident occurred when she and her entourage arrived late for boarding an Abuja bound Air Peace Airline flight and thereafter attempted to force it from taking off without them.

Reports said Mrs Amaechi’s entourage formed a human barricade to prevent the fully boarded aircraft from taking off while her armed security aides beat up two of the airline’s ground staff for not allowing their principal board the flight.

According a report by the Federal Airport Authority of Nigeria (FAAN), two officials of its Customer Care Service/SERVICOM unit on duty, Otobo Edward, and the FAAN Marshaller, Promise Nsirim, were also assaulted by the angry aides when they tried to intervene.

The report by the Crime Investigation/Intelligence Unit of FAAN at the Port Harcourt International Airport said Mrs Amaechi supervised the brutalisation of the officials and directed her aides to seize their staff identity cards, telephones and FAAN on-duty-cards.

The report made available to PREMIUM TIMES on Wednesday in Abuja, said the minister’s wife accused the airline staff and FAAN officials of being agents of political opponents sent to frustrate her travelling.

But a statement by FAAN on Friday said Mrs Amaechi had nothing to do with the incident.

“Our attention has been drawn to a trending story to the effect that the wife of the Honourable Minister of Transportation, Mrs Judith Amaechi supervised the assault and manhandling of some airport officials on the 26th May 2018, because she was refused boarding an Air Peace flight from Port Harcourt to Abuja,” Yakubu Henrietta, FAAN’s General Manager, Corporate Affairs, said in the statement.

“The Authority will like to state emphatically that the incident has nothing to do with the Honourable Minister’s wife, it was between some security personnel at the airport and airline officials.”

The agency however failed to give further details of the incident.

As Minister of Transportation, Mr Amaechi supervises aviation agencies such as FAAN.