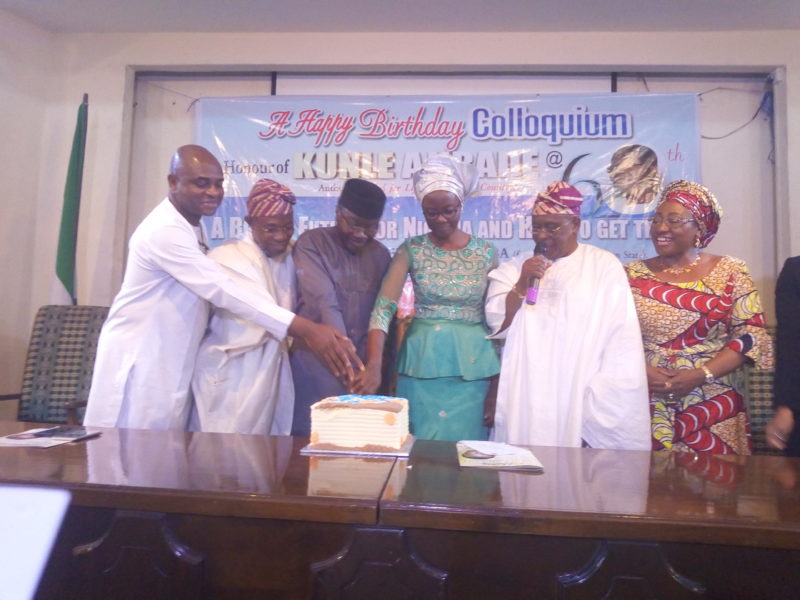 Nigeria’s Nobel Laureate, Wole Soyinka, on Wednesday decried the rate at which investigative journalists are being murdered across the globe.

Mr Soyinka spoke at the 60th birthday colloquium held in honour of veteran journalist, Kunle Ajibade, at the Nigerian Institute of International Affairs, Victoria Island, Lagos. The celebrant turned 60 on May 28.

Mr Soyinka, who led the colloquium, in his speech said the number of investigative journalists who were killed in the course of duty are more than the journalists who died covering wars across the globe.

“I am glad that Abacha jailed you because he probably saved your life,” the professor told Mr Ajibade.

The Nobel laureate also lamented the level of corruption in the Nigerian Police, adding that investigative journalism could help reform the Nigerian police system and other institutions riddled with corruption.

Recalling how Mr Ajibade’s investigation exposed a certain police chief, Mr Soyinka described the celebrant as a respectable doyen of journalism in the country who was prominent during the military regime where he fearlessly and tirelessly fought through his pen.

Mr Ajibade was one of the major pillars of the field of investigative journalism in Nigeria who impacted the country through his immense contributions to national development, he added.

The colloquium which was themed “A Bright Future for Nigeria and How to Get There” was chaired by a veteran journalist, politician and former governor of Ogun State, Olusegun Osoba. It also had other notable bigwigs in attendance.

In his speech, Mr Osoba commended Mr Ajibade on his strides in the area of investigative journalism. He explained that the celebrant’s investigative works helped fight the military regimes of the 1990s, especially the late despot Sani Abacha.

Mr Osoba also eulogised the wife of the celebrant, Olubunmi Ajibade, for being a virtuous woman, a strong pillar of the family during her husband’s trying times and a wonderful mother who raised their children.

Obari Gomba, an English lecturer at the University of Port Harcourt, read a poem in honour of the celebrant while renowned poet and Chairman Organising Committee, Odia Ofeimun, read the welcome speech at the colloquium.

Speaking on the theme of the colloquium, Ayisha Osori, author of acclaimed book “Love Does Not Win Elections”, said Nigerians will need to infiltrate the political system if there would be change in the administration of the country.

Ms Osori lamented the decadence in the Nigerian political system but opined that the system will not change until “decent” people get involved in the political process. She gave instances of how she joined politics to contest election in Abuja, saying perhaps she was “foolish” and had no clue how the system worked.

She described primary elections across parties in Nigeria as a charade, narrating how she parted with N17,000 to obtain the membership form of the PDP. “The delegate system is skewed for manipulations… the party system is an industry,” she said.

She explained that the horrible experiences of novices like her many years ago was still what obtained, adding that it is the source of the nation’s regression.

“If the politics hasn’t changed, why are we surprised our lives haven’t changed?” she quipped, urging Nigerians to participate in the system to engender change.

On his part, a former deputy governor of the Central Bank of Nigeria, Kingsley Moghalu, said Nigeria is battling three major problems which he identified as divisions among the people, poverty, and poor standing among world super powers. The presidential hopeful called for the education of Nigerians to make wise political decisions.

The wife of a former governor of Ekiti State, Bisi Fayemi, called for leadership of the society from the homefront. Mrs Fayemi explained that leadership shouldn’t be seen as exclusive to only political office holders but every Nigerian should do their bit in their individual spheres.

Ayo Obe, human rights crusader and lawyer, also reiterated the need for Nigerians to contribute their quota to development while Owei Lakemfa, columnist and labour activist, lamented that the progressives are getting worn out in Nigerian politics and it is high time they re-examined their ideologies and the present political realities.

Femi Falana, lawyer and activist, noted that there had been so much killings in the land and it was not the duty of the federal government to maintain law and order in the states, as such duties belonged to the governors.

He said, “A governor cannot go to the television and be crying that your people are killed. No. Under the constitution of 1999, section 214, we didn’t have a federal government police, we have the Nigerian Police Force which shall be controlled, organised and supervised by the Nigerian Police Council.

“Who are the members of the Nigerian Police Council? The president as chairman, Inspector General of Police, the chairman of the service commission and the 36 state governors. So, we have a body where the governors constitute the largest number to determine the fate of the police. The president cannot appoint the IGP without seeking your consent or remove one. But what has happened since 1999, the governors have totally abdicated the responsibility of managing the Nigerian police force to the president. No governor is informed, they are only informed in a meeting and nobody will oppose to it and that is the end of the matter. That is why we are in this mess.

“We are in a republic where the Supreme Court has held that the governor of a state is not for decoration, you have the power to give instruction to the police, the only time he can disapprove your instructions is when he says ‘please, I want to confirm from the president’.

Mr Falana lamented how Nigerians are being killed in Kaduna, Zamfara, Benue and Taraba, adding that the government should offer Nigerians military training.

In his address, Osun State Governor, Rauf Aregbeola aligned with Mr Falana’s position but argued that things would not degenerate. Mr Aregbesola eulogised Mr Ajibade for his tenacity and contributions to Nigeria’s democratic growth.

He said, “My vision is for a Nigeria that will give leadership to other nations, particularly within the Lake region of Africa, where the wealth of our race is actually.

After the deliberations, the chairman of the occasion, Mr Osoba, supervised the cutting of the cake and eulogised the celebrant. Mr Osoba, who said he flew in from Spain Wednesday morning, said Mr Ajibade was very dear to him for his courage and tenacity in the face of tribulations.

In his tributes to the celebrant, Yemisi Shyllon, an associate of Mr Ajibade, said the quality of speakers and people at the event allude to the importance of value over raw power. He maintained that good name is more valuable than gold and silver.

Idowu Obasa, a colleague of the celebrant at TheNews, urged Nigerians to undermine the sytem for change to occur. He lamented that sometimes, his colleagues who fought for democracy often lament that the struggle was in vain because it appears there is no achievement inspite of the sacrifices made.

Lai Babatunde, another associate, said Mr Ajibade’s life represents the triumph of moral authority over sheer power and its abuse. He commended the celebrant for his loyalty and tenacity of purpose.

“At no point did he betray anybody,” he added.

Femi Ojudu, special adviser to President Muhammadu Buhari, described the period of the Abacha junta as a very harrowing period.

In his vote of thanks, Mr Ajibade appreciated his wife, family members and associate including everyone present at the event. He called on Nigerians never to relent and strive for the growth of the nation.

The event which had a number of creatives in attendance featured performances from Freedom5, Folk songs from Nerfertiti and Ben Tomoloju, poems by Akeem Lasisi, Aduke Gomez and others.

There were also readings from Kunle Ajibade’s ”Jailed For Life” by Joke Silva, and another reading from his other book ”What A Country!”. There were birthday wishes from notable writers and journalists.

Those in attendance include Wole Soyinka and his wife, Babafemi Ojudu, NIJ Provost Gbemiga Ogunleye, Odia Ofeimun amongst other family and friends.

The iconic journalist, Mr Ajibade, served as a reporter for various media houses, a Senior Correspondent for The African Concord, Assistant Editor with The African Guardian, and then assumed different editorial and management responsibilities in the now rested Tempo and A.M News titles, before becoming the Executive Editor of TheNEWS magazine and P.M.News.

Mr Ajibade was arrested by the Abacha junta and “jailed for life” in 1995. His ordeals after three harrowing years are chronicled in his book, ‘Jailed for Life: A Reporter’s Prison Notes’, which won the Victor Nwankwo Book of the Year award in 2005.

Together with others – Dapo Olorunyomi, Bayo Onanuga, Idowu Obasa, Babafemi Ojudu etc – Mr Ajibade was at the forefront of the struggle for the entrenchment of democracy and fought the military regime of Mr Abacha headlong with the instrumentality of the press.