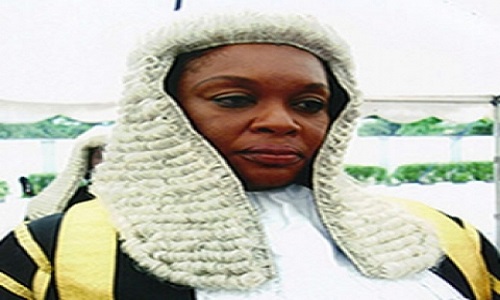 Ramatu Ahmed, an official of the National Judicial Council (NJC), on Friday told an Ikeja High Court that the salaries and allowances of judges are not paid in foreign currencies but in Naira.

Mrs Ahmed said this while being led in evidence by Rotimi Oyedepo, an EFCC prosecutor, at the ongoing corruption trial of Rita Ofili-Ajumogobia, a Federal High Court judge, and Godwin Obla, a Senior Advocate of Nigeria (SAN).

Mrs Ofili-Ajumogobia faces a 27-count charge of unlawful enrichment, taking property by a public officer, corruption, forgery and giving false information to an official of the EFCC.

The NJC official, who was subpoenaed by the EFCC to testify as its 13th prosecution witness, responded to questions about the allegedly questionable foreign currency transactions in the bank accounts of the judge.

Mrs Ahmed identified Mrs Ofili-Ajumogobia as a customer to the Diamond Bank accounts, including a corporate account under the name Nigel and Colive, where deposits of 894,400 dollars and N56.2 million were made.

“The allocation budget is routed through the NJC which is disbursed to the various courts.

Mrs Ahmed, in her testimony, also noted that judges were not permitted to maintain and operate corporate bank accounts while still in service.

The News Agency of Nigeria (NAN) reports that the NJC official read aloud in court the Code of Conduct for Judicial Officers.

Reading paragraph 2.5 of the handbook, she said: “A judge shall not accept a gift from a lawyer, particularly one who appears before him and accept gifts provided the gift is given in the period of festivities and is not of pecuniary nature.”

Attempts by Mr Oyedepo to make Mrs Ahmed interpret the provisions of the Code of Conduct for Judicial Officers were, however, resisted by Olawale Akoni, counsel to Mrs Ofili-Ajumogobia and Ifedayo Adedipe (SAN), counsel to Mr Obla.

According to Mr Adedipe, the witness who is a lawyer, cannot interpret the content of the document before the court.

She also noted that judicial officers did not receive their salaries and other allowances from other sources.

Following Mrs Ahmed’s testimony, Mr Oyedepo informed the court that his next witness was not present in court.

In his reaction, the judge, Hakeem Oshodi, expressed his displeasure about the development: “Let the court be the one that will say trial cannot go on; you did not come fully prepared.

“It is good that the NJC is here. Let the NJC be informed that this is what is happening, we got stuck because there are no more witnesses; this is not the court’s fault.

“I had set aside the whole of Friday to hear this case, yet, the EFCC is seeking an adjournment.”

Responding, Mr Oyedepo said: “My lord, I brought a witness that was examined-in-chief and cross-examined today.

“I brought a witness, but I did not know how long the cross-examination will take.

“The last time, a witness was cross-examined for two days. The witness that was supposed to testify has been coming; the last date, the witness was in court.

“I do not need anybody to commend me. But I know the little contributions I have made; I know I am not indolent, I am not lazy.”

“Oyedipo asked us to be here; he granted a press interview blaming senior lawyers for the delay.

“I ought to be in Akure, but I am here; I would have asked for a cost.”

Mr Adedipe noted that there was a need to amend the law so that the anti-graft agency could pay for cost ”when it errs in court”.

Consequently, the judge adjourned the case until June 8 for a continuation of trial.

The accused, Mrs Ofili-Ajumogobia and Mr Obla, are standing trial on a 31-count charge bordering on corruption.

They are jointly charged with two counts bordering on perverting the course of justice.

Mr Obla is facing a two-count charge of offering gratification in the sum of N5 million to Mrs Ofili-Ajumogobia while serving as a judge.