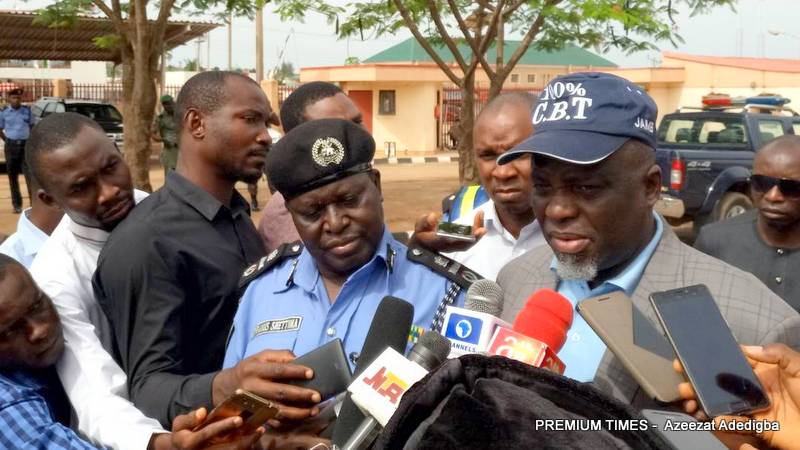 At least 37,000 Nigerians on Friday sat for an aptitude test in the ongoing police recruitment exercise.

About six thousand are expected to be recruited into Nigeria’s foremost security agency at the end of the exercise.

The Joint Admissions and Matriculation Board (JAMB), which conducted the examination at 156 computer-based centres across the nation, said the police paid it over N100 million for its role.

PREMIUM TIMES reported how the police advised candidates to be of good conduct and not to engage in malpractice, as anyone caught would be arrested, investigated and prosecuted.

While the examination was going on, the Assistant Inspector-General of Police, Training and Development, Istifanus Shetima, was at JAMB headquarters in Abuja and fielded questions from journalists.

He said the final shortlisting and recruitment would be determined by the number of vacancies and performance of the candidates .

According to him, the minimum requirement for recruitment is Senior Secondary School Leaving Certificate.

He said the police chose JAMB to conduct the examination because the police want a high standard.

“We want to maintain standard in the Nigerian Police Force that is why. And we know JAMB has been very excellent in terms of conducting exams, to get excellent people to join the Police Force,” he said.

He said candidates were not charged fees for the examination.

JAMB Registrar, Ishaq Oloyede, said the board’s job is to ensure that sets standards were enforced while noting that some of the candidates were disqualified at the centre.

“We conduct exams for different agencies both in the public and private sectors because we have the facility which is a public facility and they are at minimum cost; we allow people to use the system.”

According to Mr Oloyede, “We have so many people who believe in us, particularly those who want to do things transparently. But if you want to do something that is not that transparent, JAMB is not the right place to go.

“But if you know that you want to set the rules and you want the rules to be enforced, JAMB will give you the services at a cost you cannot get elsewhere.

“So far so good, The police complied with all the agreements about setting standards and ensuring that there is no waver at any point in time. The examination was peaceful across the nation, the only centre that had issue in Otukpo, Benue State has been settled.”

The registrar said the board has conducted computer-based tests for about 16 agencies in Nigeria .

“I think we will be starting the Road Safety Corps examination very soon. And we have assisted to do for MTN, EFCC, and Christian pilgrims Commission and so on.

“Anybody who approaches us, West African College of Surgeon and the National Postgraduate College; all those who want transparent and excellent work would approach JAMB and we will ensure that when it comes to CBT examination, we will ensure it is done at little or no cost,” he said.