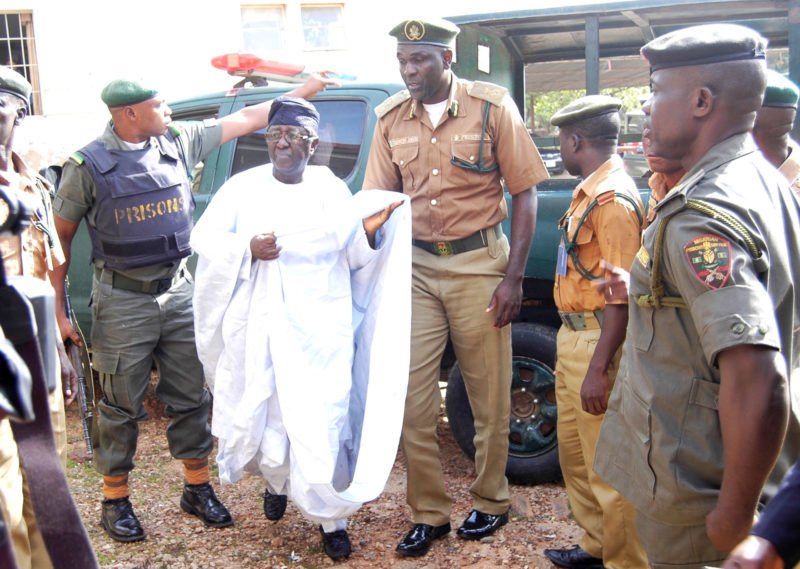 Pic.15. Former Governor of Plateau, Sen. Jonah Jang being led to the court by the Prisons officials for continued hearing in alleged corruption charges by the EFCC in Jos on Thursday (24/5/18). 24/5/2018/Sunday Adah/JMH/BJO/NAN

How I preached while in detention — Ex-Gov. Jang

Former governor of Plateau state, Jonah Jang, who was granted bail Thursday morning by the Plateau state high court in Jos, has described his detention in prison for one week on the order of the court as an act of illegality.

Mr Jang, who is a senator, secured freedom after the court granted him bail in the sum of N100 million.

He had been detained at the Jos prisons following his arraignment Wednesday last week for alleged stealing of N6.3 billion while he was governor.

“If the laws of our country are still potent under the current circumstances, my detention constitutes a gross abuse of the fundamental rights guaranteed me as a law-abiding citizen as enshrined in the 1999 Constitution,” he said in a press release he personally signed shortly after he was release on bail.

The senator said the EFCC violated Nigerian laws by holding him beyond 24 hours before arraignment.

Below is the statement by Mr Jang:

“For over a week, I was kept in detention by the Economic and Financial Crimes Commission (EFCC), deprived of the inalienable right to personal freedom and association.

If the laws of our country are still potent under the current circumstances, my detention constitutes a gross abuse of the fundamental rights guaranteed me as a law-abiding citizen as enshrined in the 1999 Constitution of the Federal Republic of Nigeria, as amended.

Where the Constitution provides for an accused person to be charged to court within one day, I was held by the EFCC for over a week in flagrant disregard to the letters and spirit of the supreme document which legitimizes the very existence of our country.

My lawyers have instituted a case at the FCT high court and I shall pursue it to its logical conclusions.

As a believer in Jesus Christ, I count it all joy to be found worthy of these trials and tribulations. I am aware of my fallibility as a mortal, but it has been a rare privilege by all standards of estimation, to be granted the opportunity to share the gospel of our Lord and Saviour to many souls I met in captivity. It was a remarkable experience to fellowship with brethren in that kind of condition.

As Governor of Plateau State in the 8 years entrusted to me, my preoccupation was the welfare, wellbeing, and security of the people. My work was dedicated to opening new frontiers and elevating our state and people to a status commensurate with the expectations of a world which has changed tremendously.

A testament of that can be easily identified in all 17 Local Government Areas of the State, and other strategic areas within the governance landscape.

The burden I carry in my heart is not of grudges against those against me, but of gratitude for those who have endured difficult conditions to stand with me through this ordeal. I am convinced beyond doubts that your labour of love shall not be in vain. May God bless you for remembering me in my hour of distress.