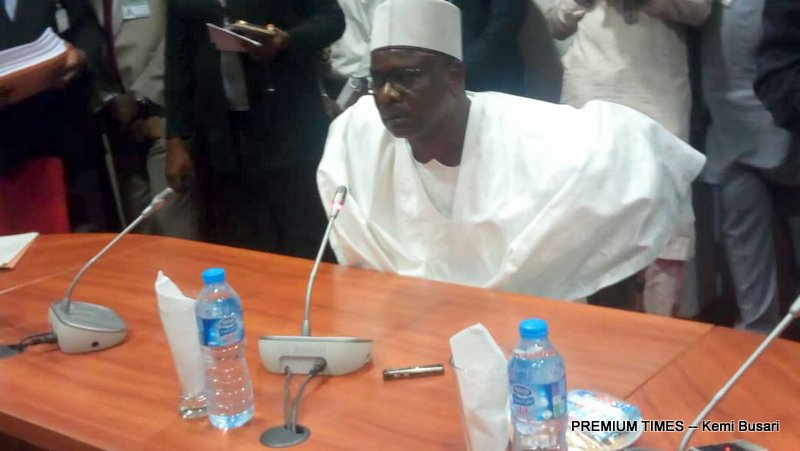 Ali Ndume before the Investigative panel

Ali Ndume, a senator of the All Progressives Congress, has denied having a hand in last month’s invasion of the Senate by hoodlums.

Mr Ndume was alleged to have directed a sergeant-at-arms on duty on the day of the invasion not to touch the mace, thereby allowing the thugs have easy access to it.

Speaking before a National Assembly committee investigating the incident, the lawmaker denied giving such directive.

Mr Ndume had earlier craved the indulgence of the committee to allow his appearance hold behind closed-door.

Journalists were excused from the gathering but called in again after about 10 minutes. The reason, it was learnt, was to have his statement on record.

The chairman of the committee, Ibn Na’Allah, set the tone for the hearing.

“We had a statement from the deputy mace bearer wherein he alluded allegedly that he made an attempt on 18 April inside the chamber of the Senate to take into safety the mace of the Senate into safety when he saw confusion going on and you advised him to leave it. Is that correct? ” he asked.

In denial, Mr Ndume said he was surprised that such allegation was raised against him.

“I didn’t know in my whole years in this National Assembly that we are that exposed. For some people to just come in and take the mace and run away.

“For me to prevent somebody or to advise somebody not to do his job is just totally out of place because I don’t have the authority to do that. I did not do that, I cannot do that and I’m not supposed to do that.

“It’s just like saying now that because you are a father to a policeman who is supposed to prevent crime and arrest criminals, then you as his father when you see a criminal and he commits crime and you say don’t arrest him and he refuse to arrest. And he comes to say I didn’t arrest the criminal because my father said I should not. It doesn’t make sense.”

A member of the committee from the House of Representatives, Toby Okechukwu, asked the senator if he had ‘anything’ that may be useful to the committee in its probe.

Mr Ndume said he had already decided to write the committee as against making statements because of the sensitivity of the subject.

“I really want to sit down and write to this committee but it is confidential. If you say it in the face of the camera, somebody that is trying to circumvent that will now read through and know how to circumvent it.”

He was thereafter discharged.

Earlier, another accused senator, Ovie Omo-Agege, refused to respond to the questions of the panel. He said he had already filed a suit in court challenging the panel and thus answering any questions could be tantamount to disrespecting the court.