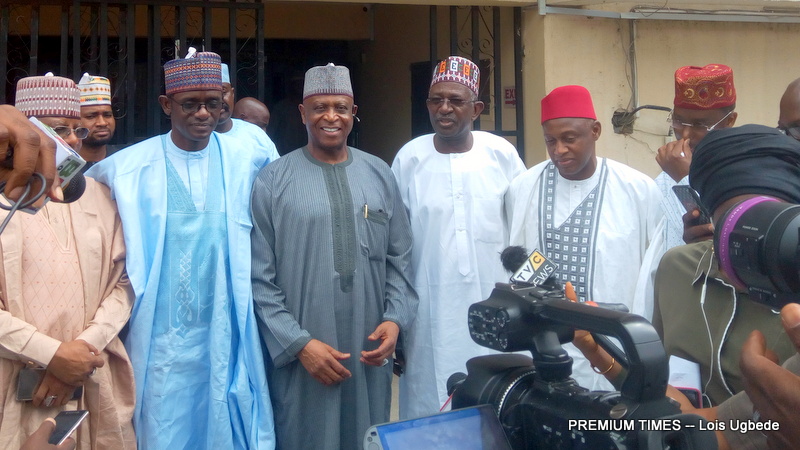 The deputy chairman (North) of the All Progressives Congress (APC), Shuaibu Lawal, has said the grievances of the New peoples Democratic bloc in the party (nPDP) are genuine.

Mr Lawal said this on Monday in Abuja while addressing journalists after a meeting with members of the bloc led by former Acting PDP National Chairman, Kawu Baraje.

The bloc had in a letter widely published in the Nigerian media last week complained of being sidelined in the party and by the government of President Muhammadu Buhari, despite their contributions to the APC victory at the 2015 general elections.

It called for a meeting with party leaders to address the complaints of its members.

On Sunday in Ilorin, Kwara State, Mr Baraje disclosed that the party had scheduled a meeting for Monday in Abuja to address the issues raised by the group in the letter to the party.

Speaking at the end of the meeting at the party’s national secretariat, Mr Lawal said no resolution was reached but stressed the party will address the issues.

“We have not yet resolved. They wrote a letter to us, they are party men, they have grievances, we looked at the letter, their grievances are genuine. And they requested a meeting within seven days and before the seven days expired, I called them and they were not ready to come, they said we should shift the meeting till today, which we did,” Mr Lawal said.

“So, we are listening to them, we have listened to them and we are taking up their matter seriously, we will address it. We don’t ignore our people except if you don’t send your grievances to the party. But if you send, we will always address your grievances.”

Mr Baraje who led the group to the meeting which lasted an hour, described it as successful.
“As you are aware that we requested that we wanted to see the party, and the party, very sensitive party, very responsible party, responded to our requests adequately and we think it is a very encouraging time,” he said.

“Since last week, they’ve gotten across to us but because of one logistics or the other, we couldn’t come until today.

“We begged the party to shift the day till today and today we have seen our party. We are party members, this office is our office, we have only come home to discuss those observations we wrote in our letter. The meeting was very beautiful.”

Asked which of the requests the party addressed, Mr Baraje said all of them. He said no conclusion was made yet but that he was satisfied so far.

“We have addressed all the requests. We have not concluded, the discussions continue.

“So far so good. We have just started. And when you start a race, you don’t say whether somebody wants to see you until you are getting to the middle or to the end. But it is a good start, it is a good beginning.”

Speaking on the faction of the group which disparaged its claims, he said, “I am not ready to answer that because somebody had earlier responded to them adequately before.

I think the former youth leader of the defunct nPDP responded to them and once somebody has responded, there is no need beating around the bush.

“In any case, in any group, particularly political groups, you are bound to have a splinter while they splint is best known to them. As far as we are concerned, the group that sent me here, or sent us here are 95.9% intact.”

Mr Baraje said the group never threatened to do anything against APC.

“We never threatened. I said it yesterday to your colleagues. If you look at that letter, what we said was that we suggested that we are attended to, and have a meeting within seven days as a result of the preparation for congresses and convention if you look at that paragraph. That is what we said.”