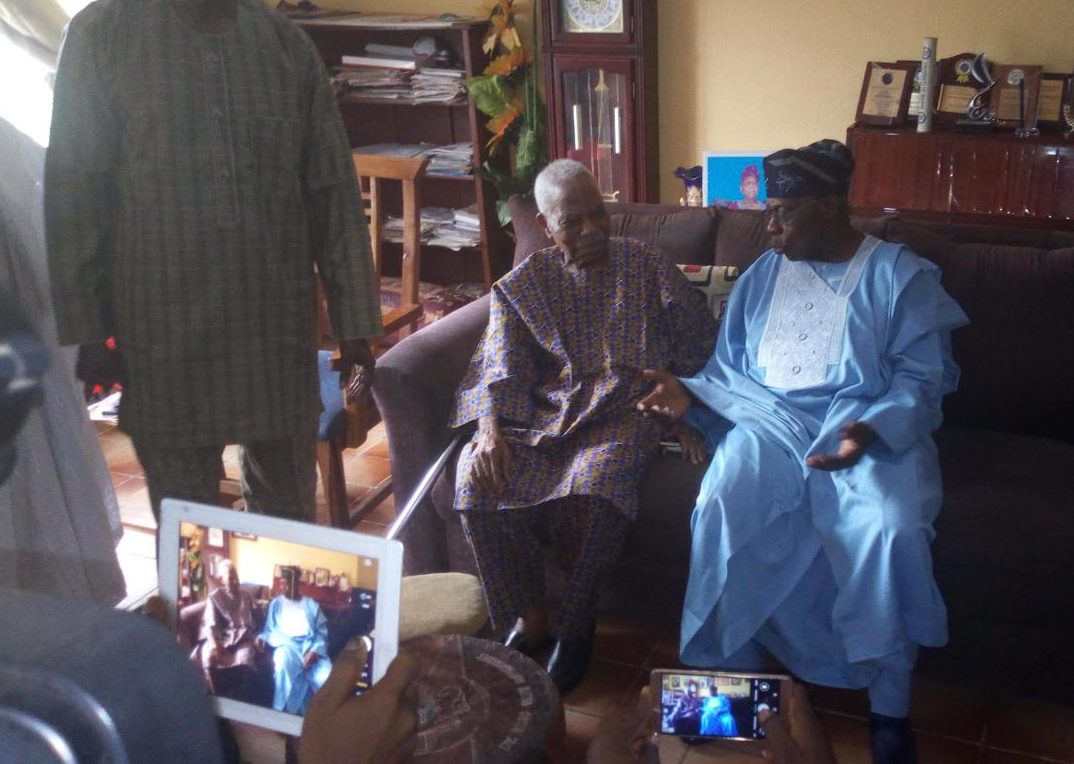 Nigeria’s former President, Olusegun Obasanjo, on Monday made a surprise visit to the Akure home of the leader of Afenifere, Reuben Fasoranti, where he held a meeting with leaders of the pan-Yoruba socio-political group.

The meeting was held behind closed doors and had other Afenifere leaders such as the group’s secretary, Seinde Arogbofa, Sola Ebiseni, Kole Omololu, Femi Aliko, among others, in attendance.

Although details of the meeting which lasted for about 20 minutes, were sketchy, PREMIUM TIMES gathered that Mr Obasanjo canvassed issues that would improve the situation in the country beyond the 2019 elections.

It was also gathered that the state of insecurity in some parts of the country dominated the discussions.

Mr Obasanjo, in his usual jovial manner, said “I have only come to greet my father,” while rebuffing every attempt by journalists to get him to disclose the real intent of his visit.

Pestered by reporters to disclose the details of the visit knowing that he had not met with the group for nearly two decades, Mr Obasanjo said, “Can a son not come to see his father any time he wishes? Do I have to take permission from you before seeing my father? And how does that become your concern?”

Mr Fasoranti described the visit by the former president as historic, and the first in about 20 years.

He said the Yoruba group was in support of Mr Obasanjo’s moves to achieve a peaceful and virile Nigeria.

Afenifere and Mr Obasanjo have had a cold relationship since the latter’s election as president in 1999.

Mr Fasoranti, in his remarks after the meeting, said it was a great reunion.

“He (Obasanjo) said he has come to pay courtesy visit, saying he appreciates all my efforts about Nigeria particularly the Yoruba nation. He has come now because he values my friendship,” he said.

According to Mr Foranti, the visit of Mr Obasanjo has signified the end of all the conflict between Afenifere and the former president.

He noted that Afenifere is in support of the letters written to President Muhammadu Buhari by the former president.

On the possibility of a merger between SDP, PDP and ADC ahead of the mega party, Mr Fasoranti noted that it was wise to form a formidable force against the ruling APC.

“It is the joy of everybody if formidable teams can unite against the evil government that we have there now,” said the octogenarian.

“Look at the killings in the north, the President is very silent about it. And they are his people, and we are all Nigerians, that is bad enough.”