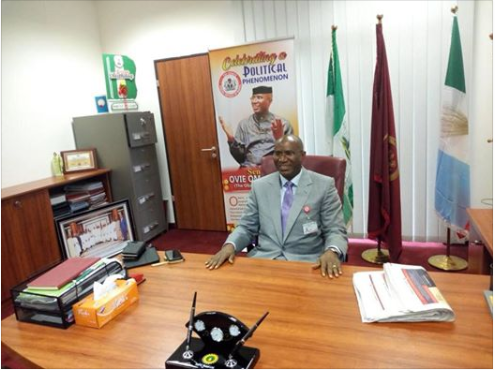 Delta Central Senator, Ovie Omo-Agege, whose suspension by the Senate was quashed by the Court, has resumed legislative duties.

Mr Omo-Agege was at the chamber briefly Wednesday morning. The senator signed the attendance register and left before the start of plenary.

His resumption was ordered by a judgement of the federal high court which nullified his lengthy suspension from the Senate.

Mr Omo-Agege was not at the Senate as at 10:55 a.m., and it was not clear whether he would return to the chamber.

Earlier, an aide to the senator, Efe Duku, shared his photo sitting in his office.

Mr Omo-Agege is expected to appear before the Senate and House of Representatives’ joint ad-hoc committee investigating the April 18 Senate invasion.

Mr Omo-Agege and his colleague Ali Ndume (APC, Borno) were summoned for allegedly aiding the invaders who stole the Senate mace.

The committee agreed the senators should appear before them by 11 a.m.

The committee is yet to convene as at the time of filing this report.