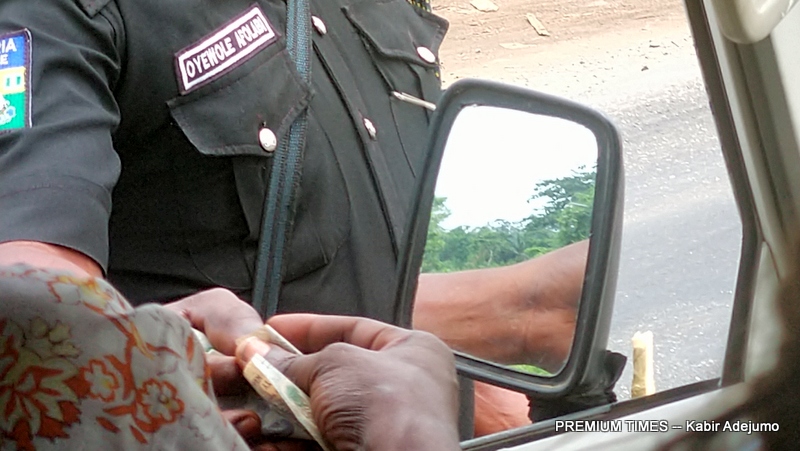 One of the police officers, whose badge identified him as Oyewole Afolabi, was caught by PREMIUM TIMES collecting N50 from a bus driver who was conveying passengers to Ibadan from Ajah, Lagos State, on Sunday.

The second officer, Eniola Olaiya, was captured on camera by PREMIUM TIMES as the same driver crossed the Oyo State border with Ogun State into Ibadan.

Police officers have continued the culture of extortion at checkpoints despite decades of condemnation by the Nigerian public and foreign think-tanks. Mounting roadblocks is one of the easiest ways for officers to shakedown motorists.

Oftentimes, they compromise their official duty by taking arbitrary ‘fines’ from motorists whose vehicle licence or insurance papers are outdated or missing. Where all vehicle and driving credentials are intact, officers found other ways of harassing road users to squeeze out as much as they could within the pace of a few seconds.

The bus driver who was extorted in this particular instance told PREMIUM TIMES if he had refused to cooperate with the officers, he could be ‘unnecessarily’ delayed for several hours.

“If we don’t give them, they will delay us unnecessarily,” the driver said under anonymity to avoid a backlash from officers because he plies the route regularly. “In fact, we add police extortion fee to passengers transport fare. I can’t run from them because I follow this road everyday.”

On Saturday evening, PREMIUM TIMES forwarded multimedia evidence of the officers’ conduct to Abayomi Shogunle, head of police complaints unit in Abuja. Mr Shogunle, an assistant police commissioner, promised to examine images and get back later on.

In recent decades, especially in the advent of Internet, hundreds of officers have been caught on camera soliciting bribes at roadblocks and the action posted online.

Although most of the officers often escaped severe disciplinary measures, some of them have not been so lucky in recent years. In 2013, a sergeant was dismissed after a viral video showed him soliciting bribes from motorists in Lagos.
In June 2017, four officers were dismissed for extorting a citizen in Ijebu Ode Area Command, the same jurisdiction where Mr Afolabi was caught on camera by PREMIUM TIMES.
Last December, the police in Ekiti sacked an officer for allegedly killing a motorist who reportedly refused to comply with bribe demands at a checkpoint. Ayo Famodimu faced an orderly room trial before and subsequently placed on trial for the murder.

As part of measures to curb the bribery menace amongst officers, successive Inspectors-General over the past decade have proscribed mounting of roadblocks, but the orders are usually abandoned within a few weeks.

Some unofficial accounts said officers are poorly remunerated and bribe earnings often go towards maintaining their stations and equipment. It is common to see a police vehicle that broke down due to a lack of fuel or poor maintenance.

Okechukwu Nwaguma of the Network for Police Reform in Nigeria (NOPRIN) acknowledged the challenges confronting the police rank and file, but said the brazen extortion of motorists will never be justifiable.

“The argument has always been made by low-level officers that there is no adequate provision for their operation or welfare,” Mr Nwanguma said. “It is even worse for them when senior officers send them out to extort motorists then deny involvement if they get caught.”

“Still, nothing justifies this humiliating conduct by officers and we hope it would stop soon,” Mr Nwanguma said. “It it would stop, the government would not only improve on the welfare and operation equipment for the police, there must also be a stringent training measures that would help officers live up to the highest ethical standards found amongst their counterparts across the world.”