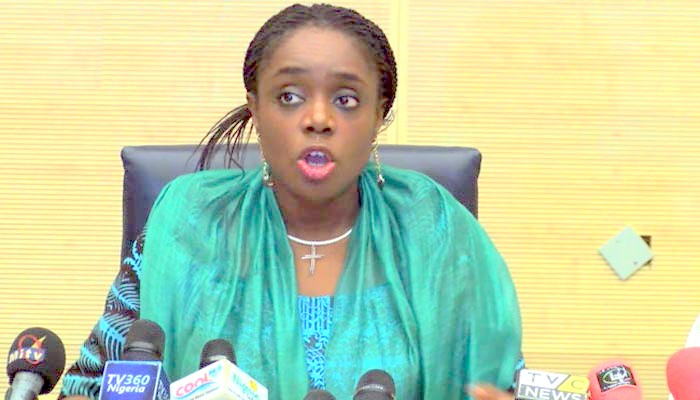 The federal government says the $322.52 million Abacha loot recovered recently from the Swiss government would be ploughed into its national social safety net programmes.

The Minister of Finance, Kemi Adeosun, said this during a joint press briefing on Sunday at the end of the 2018 International Monetary Fund and World Bank Spring Meetings in Washington DC, United States.

She said the recovered fund had already been lodged in a special account in the Central Bank of Nigeria (CBN).

Mrs Adeosun spoke on the growth in the country’s economy at the moment, saying the current outlook contrasted with the situation prior to the coming of the administration in 2015.

At the end of the Monetary Policy Committee meeting three weeks ago, the CBN governor, Godwin Emefiele, said the country’s gross domestic product (GDP) recorded positive growths of 0.7 and 1.4 per cent in the last two quarter in 2017.

Mr Emefiele recalled how flobal economic shocks triggered five consecutive quarters of GDP contraction of the economy which culminated in a minus 2.3 percent recession at the third quarter of 2017, from nearly 7 percent in previous years.

Latest statistics from the National Bureau of Statistics (NBS) said inflation for the month of March dropped from 14.3 per cent in February 2018, to about 13.49 pee cent in March 2018.

The rate has maintained nine consecutive decline from 18.7 per cent in January 2017.

“Government is confident that if we diligently implement our economic plan, we will continue to grow the economy,” she noted.

She said the government was optimistic that the country’s economic growth would be sustained, with current projections for 2019 expected to be far more robust than the present level in 2018.

She said the government was determined to use the available opportunity to grow the country’s fiscal buffers, particularly by aggressively growing its revenue base.

On the state-owned-enterprises like the Nigerian National Petroleum Corporation, the minister said government would continue to efficiently and effectively manage their operational costs, plug leakages and ensure efficiency.

“We must make sure every money earned comes in. We will drive the process of improving good governance and accountability,” she added.

On the nation’s domestic debt, the Minister said government was refinancing inherited debt portfolio from short term Treasury Bills to longer tenured debts, which has resulted in huge savings and reduction in costs of funds.

She said the Voluntary Assets and Income Declaration Scheme (VAIDS) deadline was extended by three months till June 30, 2018 following appeals from tax payers for more time to regularise their tax status.

Besides, she said the present administration has raised the tax payers’ base from 13 million in 2015 to 17 million as at 2018.

The CBN governor, Godwin Emefiele, who was also at the briefing reaffirmed the country’s positive economic growth outlook, noting that a growth rate of 2.5 per cent projected by the IMF and World Bank for Nigeria was achievable.

Noting the sustained growth in the country’s external reserves, Mr Emefiele stressed the need to continue to grow the reserves and save for the rainy day.

“If we had enough reserves, we wouldn’t have suffered the recession shocks,” he stated.

He assured that concerted efforts were ongoing to realise the 80 per cent target for financial inclusion by 2020.