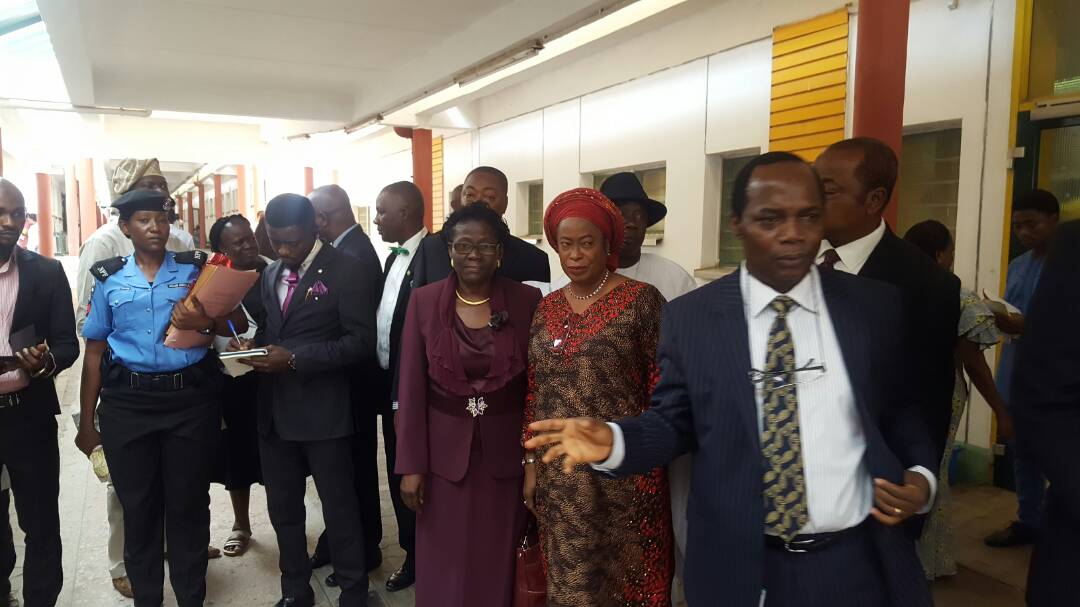 Ex-Speaker Etteh, others inaugurated as board chairpersons

The Federal Ministry of Health on Tuesday in Abuja inaugurated the Governing Boards and Councils of some tertiary health institutions and agencies.

Among the board chairpersons inaugurated is the controversial former speaker of the House of Representatives, Patricia Etteh, who was appointed to head the National Hospital in Abuja.

The Minister of Health, Isaac Adewole, in his inaugural address urged the appointees to support the vision and core values of President Muhammadu Buhari on transparency and accountability.

Mr. Adewole also tasked the appointees to key into the Buhari administration’s zero tolerance for any form of corruption.

He said this stance must not be compromised in any way.

“Government will frown at and punish corrupt practices perpetrated by any board member as well as the management team of these agencies and institutions.

“As Chairmen and Members of the Governing Boards, you have the primary responsibility to perform, which involves calming down frayed nerves, resolving industrial disharmony and ensuring an end to incessant strikes by trade unions in the health sector”, he said.

The ex-speaker, Mrs. Etteh, was among the 209 board chairpersons appointed by President Muhammadu Buhari in December.

The appointments comprised 209 board chairpersons and 1,258 board members.

Several commentators rebuked Mr. Buhari for the list, which was found to have included names of up to nine dead persons.

The list also contained appointments into a private firms’ boards and a government agency whose board members are required to be elected by law.

Mrs. Etteh’s appointment was particularly flayed because of corruption allegations surrounding her reign as the speaker of the house of representatives.

In his reaction to Ms. Etteh’s appointment, an official of the Abuja National Hospital described the appointment of the former speaker as ill-conceived.

According to the official who does not want his name on print because of fear of sanction, the vision of the hospital may not be achieved under her (Etteh).

“I am speaking from the background of someone who understands how the National Hospital is constituted. It is meant to be a flagship of medical institutions in Nigeria. We had expected that the chairman of the board who has enormous powers as granted under the National Hospital Act of 1999 should not just be a politician or someone that has history of corruption or someone who held a high office but someone who has an understanding of the health care industry. She doesn’t have that knowledge”, the official told PREMIUM TIMES Wednesday in a phone interview.

“We expected some level of knowledge in the industry she’s coming to superintend but that has not being so.

“The vision of the National Hospital will never be achieved under her. And if the charges against her are true that means this hospital that has been crying about chronic underfunding and non- performance will suffer more because it takes a lot to serve as member of the board.

“There is already a low morale and disaffection. The staffs are in their lowest morale. The vision of this hospital is yet to be achieved. We are supposed to do more. There is chronic underfunding so bringing someone that has no pedigree as per attraction of partners and clout will lead us nowhere.

“This appointment goes further to support the chronic non-performance attributed to this regime of putting square pegs in a round whole and not finding who is best suited for a particular job so we are not going to expect anything less, we are not expecting water from this hard rock”, he added.

Mrs. Etteh was removed from her leadership position in the House of Representatives amidst a scandal in October, 2007 though much later absolved of allegations of fraud levelled against her by colleagues.

Barely four months after she was ‘unanimously’ voted into leadership of the House, her colleagues turned on her and demanded that she step down from her exalted position following accusations of corruption.

According to a report by the legislators, the speaker signed off on a contract of N628 million for the renovation of her official home and that of her deputy as well as the purchase of 12 official vehicles.

The legislators insisted that the award of the contract did not follow due process.

Mrs. Etteh was also accused of being in a “romantic dalliance with former President Olusegun Obasanjo”.

Two weeks before Mrs. Etteh’s resignation, Lisa Piascik, then Charge d’Affairs of the U.S. embassy in Nigeria, reported to Washington that the speaker was indeed in a love affair with the former president.

The U.S. official described her as a “former hairdresser, romantic interest of Obasanjo, current Speaker of the House of Representatives” in an October 19, 2007 cable to Washington.

Mrs. Etteh did not take kindly to the seeming intrusion of the Americans.

“I don’t bloody care. I can have romantic interest with anybody. I am free to romance anybody. I don’t fear you media boys anymore. Go and write whatever you like,” she said in a 2010 report by the now rested NEXT Newspapers

In a motion by the then Chairman, House Committee on Rules and Business, Ita Enang, the House of Representatives later exonerated the former Speaker of alleged wrongdoing in the N628 million House renovation saga which resulted in her resignation.

Five years after her tumultuous four-month stint as the head of Nigeria’s parliament, during which time she was tagged an ‘illiterate hair dresser,’ Nigeria’s first female Speaker enrolled at the University of Buckingham, U.K. and emerged with a Bachelor of Law degree in 2015.

The same year, Mrs. Etteh dumped the Peoples’ Democratic Party (PDP) to join the ruling All progressive Congress (APC), a move perceived to mark her return to politics.