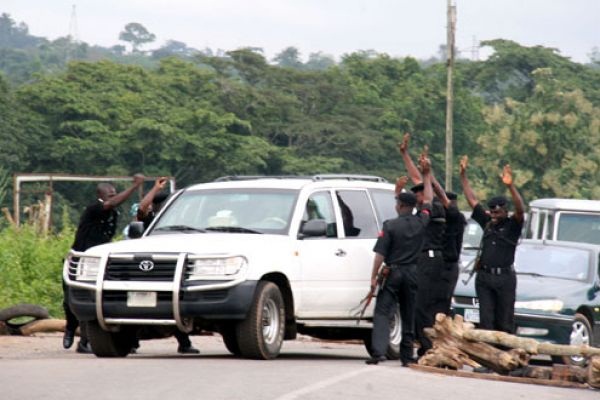 Nigerian police at a checkpoint used to illustrate the story

The perception of corruption in Nigeria worsened between 2016 and 2017, a new report by Transparency International revealed.

Nigeria ranked 148 out of 180 countries assessed in 2017 on the perception of corruption, the annual Corruption Perception Index, CPI, by Transparency International, TI, states.

The index, published Wednesday, showed that out of 100 points signalling maximum transparency and no corruption, Nigeria scored 27 points.

The results show a slight deterioration in perception of corruption in public administration in Nigeria compared to 2016.

With the one-point reduction in the score, Nigeria slipped in the country-ranking by 12 positions, from 136 in 2016 to 148 in 2017. The rankings are from 1 to 180, with 180 indicating the country having the worst perception of corruption.

The report was made available to PREMIUM TIMES by the Civil Society Legislative Advocacy Centre, CISLAC, the national contact of TI in Nigeria.

The report noted that while the rest of the world has improved in the perception on corruption, Nigeria slips further down as the fight against corruption stagnates.

On the African continent, Nigeria ranks 32nd position in Africa out of 52 assessed countries in 2017.

“While Botswana leads the continent with the record of competent and largely corruption-free public administration,

Nigeria hopelessly falls behind with 27 points,” the report stated.

In West Africa, Nigeria is the second worst country out of 17 countries, leaving only Guinea Bissau behind.

CPI is computed by the Transparency International Secretariat in Germany and is published in Nigeria by CISLAC.

CISLAC on its part said it is worried about the new but unfavourable trend in the fight against corruption in the country as shown in the report.

“This fresh setback in the fight against corruption confirms that grand-corruption, political corruption, nepotism, favouritism and bribery persist in Nigeria at all levels,” the organisation said.

“It is CISLAC’s view that the negative perception is mainly a consequence of the inability to combat grand corruption and astronomical plundering of public coffers costing the Nigerian tax payers around 25 per cent of annual GDP.

“Since the current administration has come to power on the anti-corruption ticket, no significant politically exposed person has been duly sentenced on anti-corruption charges.

It, however, noted that the majority are rather insufficient cases with little impact of returned assets into the state budget and no effect on unfavourable public opinion.

The organisation said there is reason to suspect that the judiciary is either not able or willing to prosecute the VIP cases of senior public servants and elected politicians who have either directly plundered lucrative Nigerian state resources or are at least responsible for the catastrophic lack of oversight over public funds as mandated by the constitution.

It explained that while the nation has made numerous international commitment toward fighting corruption, the majority of the commitments stay unfulfilled.

“Unless the justice system expedites politically exposed cases and forfeits meaningful amounts of recovered assets; unless the National Assembly stops political boycott of key appointments and passes much needed legislation and unless there is a tangible strategy of the government to damage-control shocking plundering of public resources, public perception on anti-corruption is unlikely to improve,” it said.

In its recommendations, CISLAC urged the government to make the 2017 anti-corruption strategy known to the grass-root level; prioritise anti-corruption courts and nominate judges with proven record of high integrity and no controversies; prioritise international cooperation and usage of international agreements to repatriate Nigerian assets abroad; and use foreign jurisdictions’ legal instruments such as recently passed, among others.