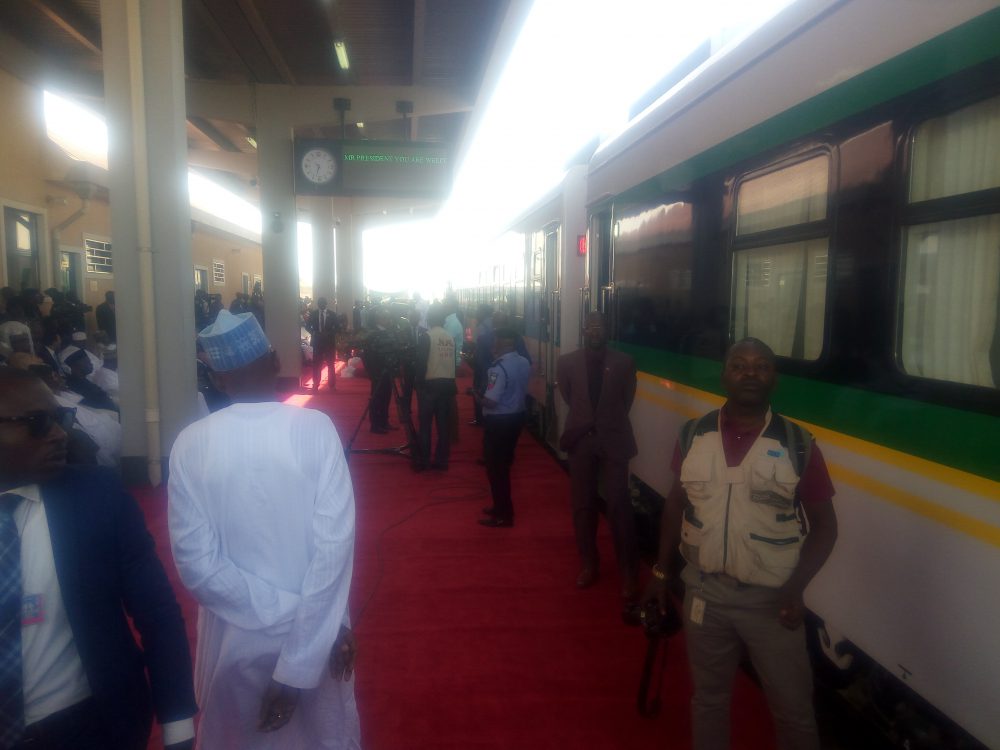 The vehicles consisted of 10 new coaches and two new locomotives.

Government procured the vehicles to reduce the stress of passengers whose large volume currently overwhelms facilities and had encouraged ticket racketeering and other sharp practices on the train route.

In his address at the ceremony, Mr. Buhari reiterated the resolve of his administration to vigorously implement the federal government’s 25-year railway master plan with a view to transforming rail transportation in Nigeria.

In his welcome address on the occasion, the Minister of Transport, Rotimi Amaechi, said railway transport had nearly become a new phenomenon in Nigeria through the current efforts of government to expand its facilities.

“The indication is that we will no longer see ticket racketeering, nobody will be sending us text messages and video clips of passengers protesting at the train stations because of inadequate services,” Mr. Amaechi said.

The minister recalled that the standard gauge rail from Idu in Abuja to Rigasa in Kaduna was commissioned in July 2016 by the President.

The project was launched several years ago by the administration of President Olusegun Obasanjo and sustained under former President Goodluck Jonathan.

The President later left took a train ride from Rigasa to Kakuri on the outskirts of Kaduna to commission the Inland Dry Port.

While commissioning the facility, Mr. Buhari called on stakeholders to make optimal use of it and avoid inflicting unnecessary hardship on Nigerians.

He said the port will boost the nation’s economy, create more job opportunities and provide shipping services, eve without a sea port.

Dignitaries who witnessed the ceremony include Mustapha Boss, Secretary to Government of the Federation; governors of Kano and Kaduna, Abdullahi Ganduje and Nasiru El-rufai respectively, and National Assembly members.

The ceremony was almost marred by overzealous security agents who had earlier molested a reporter with the News Agency of Nigeria, Taye Edeni, before the arrival of the president to the venue.

The security agents tried to deny journalists access to the venue of the ceremony.

In the melee, a security official slapped Mrs. Edeni who fell to the ground. She was later assisted by her colleagues to receive treatment from Red Cross officials.

A crew of journalists who accompanied the Minister of Transport was also blocked from the venue, despite the intervention of staff of the ministry..

Irked by their maltreatment, reporters walked away from the venue of the event before the arrival of the president.