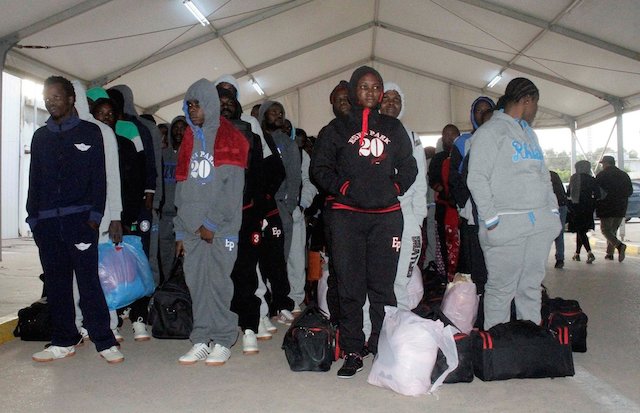 180 Nigerians to return from Libya on Monday

The International Organisation for Migration, IOM, would on January 8 repatriate 180 Nigerians stranded in Libya back to their home country.

The UN migration agency said the repatriation is under its continuing Voluntary Humanitarian Return, VHR, programme, which aimed at assisting voluntary returnees stranded in Libya to their homelands.

It said last Monday, IOM’s Libya mission chartered its first flight of 2018 under the VHR, assisting 142 returnees departing from Libya to Gambia.

“The UN Migration Agency’s next charter is set for Monday January 8, when around 180 Nigerian nationals are scheduled to be assisted under VHR to Lagos, Nigeria’s largest city and commercial hub.

“That flight will bring to close to 20,000 the number of migrants IOM has escorted home from Libya since the beginning of 2017.

“IOM’s Displacement Tracking Matrix (DTM) has identified 432,574 migrants in Libya, mainly in the Tripoli, Misrata and Almargeb regions, and estimates the number of migrants to be between 700,000 and one million,” it said.

The global migration agency said VHR was a programme that resulted in 19,370 stranded Third Country Nationals leaving primarily in the Tripoli area in 2017.

IOM said some 11,074 migrants had gone back to their home countries since it scaled up its efforts to facilitate the help for migrants interested in return assistance from Libya following the unrest in Sabratha in October.

“Blinking as they stepped into the sunlight, 301 migrants were escorted from Libya’s detention centres last month to take what would be the first of a series of flights that would see them safely home in Nigeria and Guinea by day’s end.

“Thus, ended an odyssey which began over a year ago for some of the migrants who left home full of the hope of making a fresh start in Europe,” the UN migration agency said.

“In a highly complex operation, fraught with security issues, the migrants were then flown home via charter flights to Lagos and Conakry,’’ IOM said.

It said all the migrants volunteered to be returned home by IOM rather than face an uncertain future in Libya.

“The uncertainties include lengthy periods in detention and with the potential for abuse from traffickers and smugglers in Libya. It is not known how many have suffered whilst in Libya.”

Talks at the AU-EU Summit in Abidjan in November focused on the situation in Libya, in the wake of shocking reports about rampant migrant abuse and squalid and overcrowded conditions across multiple detention centres in Libya.

This led to a major revamping of measures to tackle smuggling and mistreatment of migrants on the central Mediterranean migration route, which has claimed 2,833 migrant lives to drowning in 2017 alone.

Leaders from both regions committed to work together to end the inhumane treatment of migrants and refugees in Libya.

Another issue also discussed at the summit was how to address jointly the root causes of irregular migration. For the past year, the return of migrants has been funded by the EU Emergency Trust Fund for Africa, Italy, the Netherlands, the UK, Norway and Finland.

The other sponsors are the UN’s Central Emergency Response Fund and the Bureau of Population, Refugees and Migration of the U.S. Department of State.