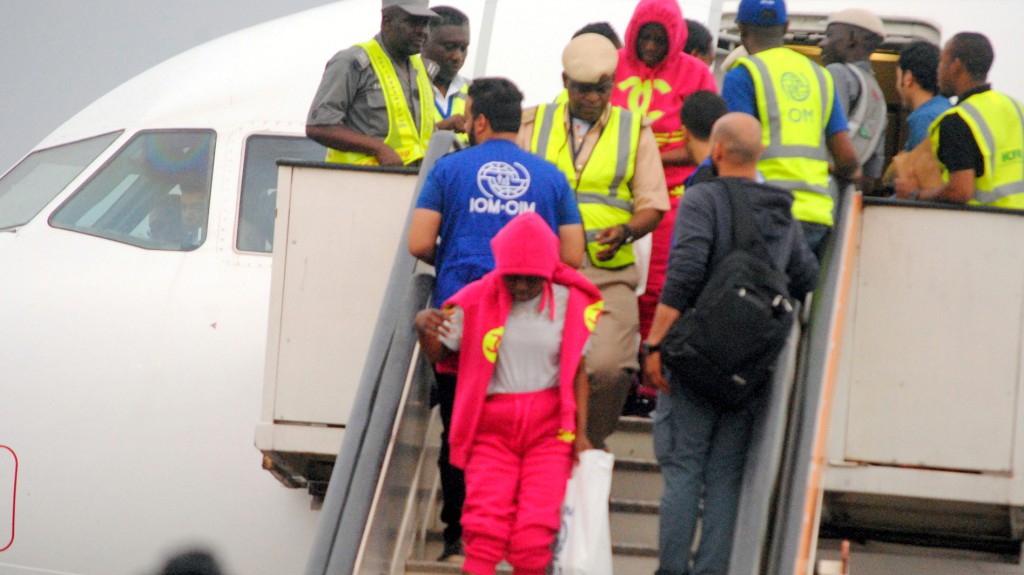 Another 257 Nigerians return from Libya

A few hours after 144 Nigerians voluntarily returned from Libya, another aircraft carrying 257 of their compatriots on Wednesday landed at the Murtala Muhammed International Airport, Lagos.

The spokesperson for the Lagos Airport Police Command, Joseph Alabi, confirmed this in an interview with the News Agency of Nigeria (NAN) in Lagos.

Mr. Alabi said the returnees arrived aboard a Libyan Airlines aircraft at the Cargo Wing of the airport at about 1.30 a.m.

He said they were assisted back to Nigeria by the International Organisation for Migration, IOM, and the European Union, EU, after being stranded in the volatile North African country enroute Europe.

Mr. Alabi said :”We received another batch of Nigerians early this morning from Libya.

He also confirmed that four of the returnees had medical cases and were promptly taken away on an ambulance for treatment.

According to him, the returnees were received by officials of the National Emergency Management Agency, Nigerian Immigration Service, the National Agency for the Prohibition of Trafficking in Persons and the Federal Airports Authority of Nigeria.

NAN reports that another set of 144 Nigerians had arrived on Tuesday at about 6.45 p.m. aboard a chartered Buraq Airlines aircraft with registration number 5A-DMG.

Also on ground to receive them was the Senior Special Assistant to the President on Foreign Affairs and Diaspora, Abike Dabiri-Erewa and officials of other government agencies.

NAN reports that the federal government said it has a record of 2,778 Nigerian migrants registered in “accessible” detention camps in Libya, ready for repatriation.

The Federal Ministry of Foreign Affairs, in a statement signed by the spokesperson, Tiwatope Elias-Fatile, on Tuesday, said the country’s embassy in Libya had been visiting detention camps to identify Nigerians for registration.

The ministry stated that those registered were issued Emergency Travel Certificates.

The ministry also explained that the embassy, in collaboration with the IOM, repatriates 250 migrants weekly and had returned 3,000 of them so far.

“From the 2,778 registered Nigerians who are still in detention camps, another set of 250 Nigerian migrants will be arriving on Tuesday December 5 via the Murtala Mohammed Airport, Lagos, at 7.00pm, to be received by NEMA officials.

“The Embassy, in collaboration with the IOM, repatriates 250 Nigerian migrants by flight to Lagos weekly – each flight can accommodate only 250 passengers.

“The repatriation is a continuous exercise and the Embassy routinely issues the requisite travel documents to the migrants.

“The Embassy will continue to engage the legitimate government in Libya and other stakeholders in addressing the plight of Nigerian migrants in that country.”

“He is in Abuja already and during the period of the consultations, arrangements have been made for him to address press conferences on the issue.