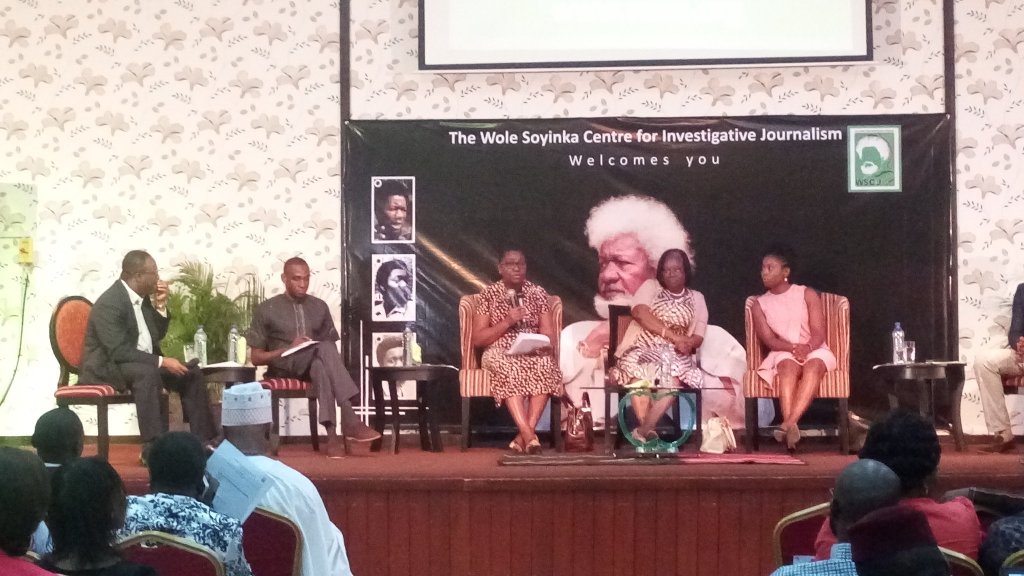 A file photo from one of the events by The Wole Soyinka Centre for Investigative Journalism (Photo Credit: WSCIJ)

A PREMIUM TIMES journalist, Kemi Busari, is among 10 reporters shortlisted for the 2017 Wole Soyinka Award for Investigative journalists.

The WSCIJ 2017 award programme which is scheduled to hold on December 9 in Lagos will also honour former education minister, Oby Ezekwesili, and the Executive Director of the Media Rights Agenda, Edetaen Ojo.

A statement from WSCIJ’s program coordinator, Motunrayo Alaka, said the shortlisted candidates were picked from a list of 166 entries for this year’s award program, which will be based on six different categories.

“A former Minister of Education, Obiageli Ezekwesili, the Executive Director of the Media Rights Agenda, Edetaen Ojo, as well as ten distinguished journalists have been shortlisted for the 12th edition of the Wole Soyinka Award for Investigative Reporting scheduled to hold on the World Anti-Corruption day, Saturday, 9 December 2017, at the NECA House, Alausa, Lagos,” Mrs. Alaka said.

“Ezekwesili was nominated for the Anti-Corruption Defender award. She is to be recognised for her untiring efforts to promote transparency and accountability as well as her unstinting commitment to the values of justice within and outside Nigeria. Ojo will be receiving the Lifetime Award for Journalistic Excellence for his leadership of issues that enshrine freedom of expression, including his dogged trailblazing effort at ensuring the passage and implementation of the Freedom of Information Act in Nigeria.

“The shortlist of journalists for the award includes, Ebere Ndukwu of Ripples, Ayodele Adeniran of The Guardian, Kolawole Aliu of Leadership, Soyombo Olufisayo of The Cable, Ayodele Ojo of Daily Sun, Adekunle Yusuf of The Nation, Kemi Busari of Premium Times, Chinwe Agbeze of Business Day, Ujorha Tadaferua of Daily Trust and Mojeed Alabi of New Telegraph.

“The award this year has six categories – print, online, television, radio, photo, and editorial cartoon, as well a special prize for food security and agriculture. The winning stories from journalists were selected by a board of judges from a total of 166 entries received by the deadline of the call for application,” Mrs. Alaka said.

The details of the entries of each of the shortlisted candidates were not disclosed.

The WSCIJ award was first held in 2005 to promote a culture of investigative reporting in Nigeria.

According to the WSCIJ, the initiative is aimed at bringing further attention to Wole Soyinka’s untiring and relentless support for freedom of expression.

2019: What Atiku must do to become our candidate — PDP BOT Chair