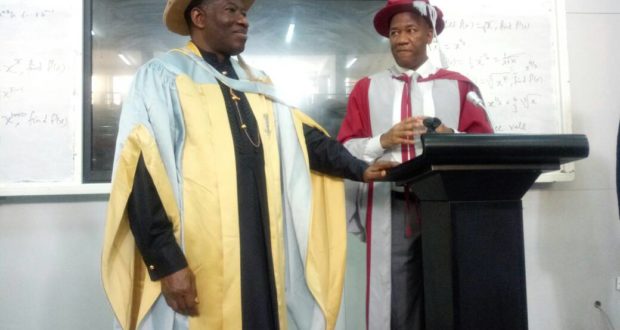 Former President, Dr Goodluck Jonathan with the Prochancellor and founder of Baze University, Senator Datti Baba-Ahmed at the 4th Convocation ceremony of the University, in Abuja, on Saturday [Photo: SundiataPost]

Former Goodluck Jonathan on Saturday warned Nigerian students to stay away from conducting research into embryonic stem cells, saying the sanctity of humanity must be preserved.

At the graduation ceremony of the first set of graduating students at Baze University, Abuja, Mr. Jonathan said scholars can make human activities become more efficient without necessarily altering the essence of man.

“It appears our classrooms have started creating individuals who function like robots, which is not good for humanity,” Mr. Jonathan said. “Training should not be about efficiency and precision alone; it should also be about character and human dignity.”

About 244 students participated at the first convocation ceremony of the university, which was established in 2011 when Mr. Jonathan was president.

The former president said the school had come a long way from the 17 students that were admitted at its opening that year.

While reading from a prepared speech, Mr. Jonathan was lighthearted, yet, serious in urging the younger generation to channel their energy into resolving Nigeria’s multi-faceted challenges.

“The kind and quality of education we offer today will determine how our country will be governed, and how prosperous it will become tomorrow,” Mr. Jonathan said. “This is because as young people, many of you sitting in the classrooms today, will sit in various Government offices and boardrooms tomorrow, to govern our country.”

He warned the students to refrain from scientific endeavours that could put their moral or religious strength into question.

“We are in an age when the talk of artificial intelligence evokes boundless passions, to the extent that our scientists are already tinkering with the idea of modifying human genes to create super humans.

“I honestly believe that as humans we can improve efficiency in the way we conduct our affairs, but I also strongly believe that the classroom must never lose its humanity,” Mr. Jonathan, a zoologist, said.

Embryonic stem cell research involves the efforts of scientists to use only stem cells to create human embryo and form artificial human life without the need for a sperm or an egg.

The first successful research which scientists conducted with embryonic stem cells came in 1998, according to the United States National Institutes of Health.

Although the World Trade Organisation strongly prohibits embryonic stem cell research for ethical reasons, some scientists are still believed to be conducting it, according to Godwin Bazuaye, a professor of haematology at the University of Benin.

Mr. Bazuaye said Mr. Jonathan’s advise to the students was not out of place since he focused his reservations on the cloning of humans, even though religion may not be a cause for concern for students who want to pick career in stem cell research.

“Although science is not a religious organisation, the president is correct to warn students against the dangers of embryonic stem cell research,” he said.

Mr. Bazuaye, who has conducted three successful sickle cell surgeries in Nigeria over the last six years, said other stem cell researches are not forbidden.

He said stem cells that offer the prospect of having a renewable source of replacement cells and tissues to treat Parkinson’s and Alzheimer’s diseases, spinal cord injury, stroke, multiple sclerosis, heart disease, diabetes, rheumatoid arthritis and other serious conductions are allowed.

Apart from rare cases such as Mr. Bazuaye’s, Nigerian scientists have not been able to record all-round development in the area of stem cells, a condition they blame on a perpetual lack of funding.

Mr. Jonathan said he backs innovation in industrialisation, but implored students not to go beyond this.

“Our classrooms must continue to create rational human beings but with sufficient technical knowledge to build the machines we need in our factories and productive spaces,” he said. “Let those factories then create the required automaton and robots, in order to preserve the sanctity of the human essence.”