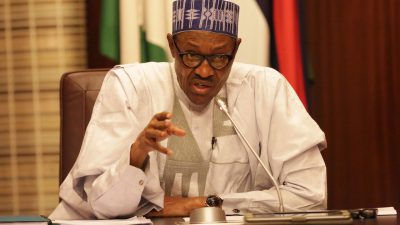 Human Rights Writer’s Association of Nigeria, HURIWA, has urged President Muhammadu Buhari to authorise the immediate reinstatement of the 38 officers that were compulsorily retired by the Nigerian Army last year June.

The rights group said the Nigeria Army Council under the leadership of the Minister of Defence, Mansur Dan Ali, Chief of Defence Staff, Abayomi Olonisakin and the Chief of Army Staff, Tukur Buratai, presided over an abrupt sitting of the Army Council that unjustifiably dismissed the soldiers.

Abdul Muhammed, HURIWA legal practitioner, made the disclosure while addressing journalists in Abuja on Monday.

The Nigerian Army had last year ended the careers of 38 officers by compulsory retirement over allegations of professional misconduct during the 2015 general election and alleged involvement in arms procurement deal.

PREMIUM TIMES exclusively reported how some of the officers, including one of the country’s brightest in external and internal security operations, were forced out of service without recourse to the armed forces rules of disengagement.

Majority of the affected officers were neither queried nor indicted by any panel but were dismissed for reasons that reportedly smacked of high-level arbitrariness, witch-hunting, and partisanship by authorities of the Army.

HURIWA criticised the army for punishing officers that were never culpable of the allegations against them adding that most of the affected officers had no link with alleged charges.

They also urged President Buhari to urgently set up a non-partisan panel to investigate all the allegations in the petition it had submitted.

“The record of the Nigeria Army shows that there was no factual basis for punishing these officers and that there has been a complete failure of a fair hearing and due process. Many of these officers have no relationship whatsoever with election duties or procurement office as falsely alleged by Army leadership. They have never served in procurement capacity throughout their careers in the Army or participated in any form of election duties during the 2015 General Elections,” Mr. Muhammed said.

“In the circumstances, the President is urged to authorise the immediate reinstatement of the 38 retired Senior Army Officers into the Nigerian Army pending an urgent and impartial investigation into all the allegations in this petition. We submit that careful review of the facts and circumstances of this petition speak to the necessity of the institution of disciplinary procedures against those high officials that were involved in the illegal and or sham retirement exercise,” he added.

In his reaction, Emmanuel Onwubiko, HURIWA National Coordinator, cited Section 15/5 of the Nigerian Constitution that states the function of the state is to abolish all corrupt practices and abuse of power.

Mr. Onwubiko stressed that Mr. Buhari should quickly address the issues of the officers that were dismissed by the army without following due process.

“If that’s what the constitution has asked the president to do, we in the Human Rights Committee expect that the president addresses this matter as quickly as possible and we are holding consultations among ourselves. We’ll give the president more time to address this matter or else we’ll take up the matter.”

“This is a man who has served this country for a long period of time and retired and eventually got elected to become the president of the country, we don’t expect that the military institution will be compromised and destroyed under his government so he should investigate all these allegations and provide redress as quickly as possible,” Mr. Onwubiko said.

The group also gave a breakdown of the affected officers, their ranks and their regions of origin claiming an ethnic bias.

In the list of the 38 senior army officers, nine are major generals; 10, brigadier generals; seven, colonels; 11, lieutenant colonels; and one a major.

Mr. Onwubiko raised concerns about the seven affected officers that emerged from Rivers State being the highest adding that the President should prove critics wrong over his perceived dislike for the South-east, South-south region by doing the needful on the matter.