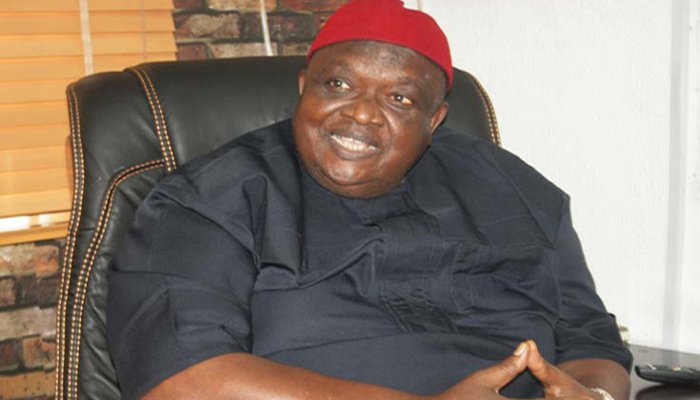 Emmanuel Iwuanyanwu, a former Board of Trustees (BoT) member of Peoples Democratic Party

Igbo never mandated anybody to talk about secession – Iwuanyanwu

A chieftain of the Peoples Democratic Party (PDP), Emmanuel Iwuanyanwu, has said that Igbo never mandated anybody to talk about breaking away from the country.

Mr. Iwuanyanwu said this in Abuja on Saturday in an interview with the News Agency of Nigeria (NAN).

He expressed worry over agitations by some groups calling for the nation’s dissolution.

Mr. Iwuanyanwu, however, said the call for restructuring was appropriate to address the numerous challenges confronting the country.

According to him, restructuring doesn’t mean division of the nation, adding ‘‘let us forget about the talk of secession by some young people.

‘‘I was the Chairman of Planning and Strategy of Ohaneze Ndigbo, so when you talk of any decision on the Igbo, it must have my consent.

‘‘Igbo have never mandated anybody to go and talk about secession.

‘‘We have heard that some youths reversed the call for the exit of the Igbo form the north.

‘‘l am happy that Nigerian leaders as well as the governors are coming up to say that Igbo are safe in their places.

‘‘Many Igbo in the north have been coming to me asking me of what to do; I want to assure them that nobody is going to hurt them.

‘‘We all stand for one Nigeria and in future if anybody makes a statement, nobody should generalise and say it is Igbo,’’ he added.

According to him, there are good and terrible people amongst the Igbo as it is in other tribes.

‘‘People should stop generalising individual’s comment as if it were the general Igbo who made the comment.

‘‘I am happy that the President (Muhammadu Buhari) has said that anyone who made threatening comments would be disciplined and he has said he would put security measures to protect them.

‘‘We have had two constitutional conferences during Chief Olusegun Obasanjo and Dr Goodluck Jonathan civilian governments. We don’t even need to have a sovereign national conference.

‘‘If the National Assembly members can be honest with themselves, they should form a committee of the whole which includes both chambers and call it a restructuring committee.

‘‘Call for submission by people then include it with the submissions from the conference by Obasanjo and Jonathan, then they will know that we want to restructure to give more autonomy, money and development to the region and avoid people running to Abuja for everything.

‘‘We need a system where people can stay in their states, create industries and get jobs,’’ he said. (NAN)