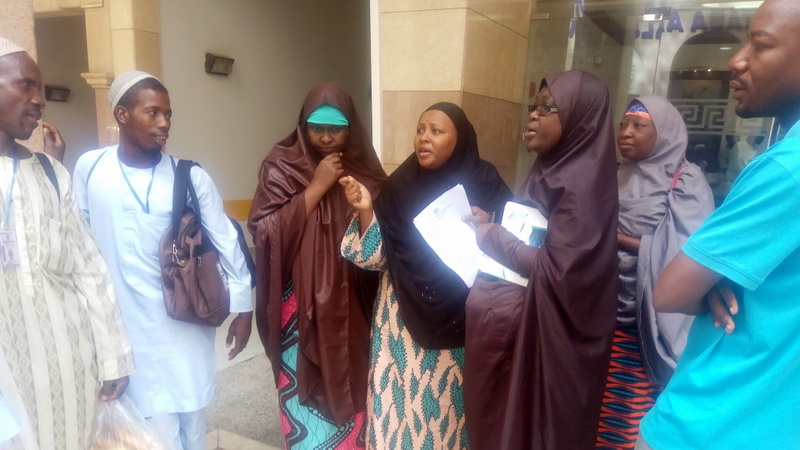 Nigerian pilgrims have expressed diverse views on the services rendered to them by the National Hajj Commission of Nigeria, NAHCON, in Madina, during the 2017 Hajj exercise in Saudi Arabia.

A cross section of pilgrims from Enugu, Oyo, Ondo, Niger, Osun, Lagos and Kaduna, who spoke with PREMIUM TIMES commended the provision of accommodation close to Prophet Muhammad (SAW) mosque in Madina.

They also commended the federal government for the prompt action taken against the molestation of two Nigerian pilgrims at Madina Airport.

“We need more of the Nigerian spices to have home (Nigerian) taste,” he, however, added.
He said this year, only seven pilgrims and two officials out of the 30 registered from Enugu for the exercise will perform the exercise.

“The rest of the intending pilgrims who picked the forms could not meet up their payments,” he said.
“We enjoy five-star treatment in our hotels. Rooms are cleaned regularly and bed sheets are changed every morning after our return from Subh (morning)prayers,” he said.

Also, Asimi Jibril, pilgrim from Oyo State, said there was need for pilgrims to also be served lunch, because according to him, “the $800 flat rate for Basic Travel Allowance, BTA, will not be enough for us to eat and buy something for the family back home. That is why we queue up for Sabil or patronise good vendors who bring food to the front of our hotels.”

Mr. Jibril, however, commended NAHCON for the medical care services and drugs provided.
In another reaction, Adeyemi Sheriff, from Ondo state accused the service providers of ‘cutting corners.’

“Some providers cut corners. They sometimes bring rice without stew. I think NAHCON should investigate them. That’s why I have been eating outside for the past three days,” he said.

“I changed $100 into Saudi currency, but I couldn’t spend it since our arrival two days ago because I am afraid of being duped,” he said.

Sani Abubakar, a pilgrim from Kauru LGA of Kaduna State called on fellow pilgrims to desist from taking double ration and to avoid food wastage.

Umar Haira’u, an official from Kaduna State and the Chief Environmental Specialist, said his team has also been able to curtail the problem of disorderliness and indiscriminate eating along the road by pilgrims.

It was learnt that the National Team of the Inspection and Compliance Committee of NAHCON, during inspection of pilgrims’ accommodation and medical care centres advised pilgrims to demand for their right to services.

Fatima Mustapha, acting team leader of the committee, said the primary responsibility of the team is to ensure full compliance of service to pilgrims as agreed with service providers.

She added that, observations made by pilgrims were noted and reported for prompt action.
“These pilgrims are the reason why all of us are here, so we must ensure they get value for what they paid for, ” she said.

Out of the total number of pilgrims travelling for this year’s Hajj, about 60,000 came from states of the federation and the FCT, while about 19,000 others were classified as those under private operators.

The Chairman/Chief Executive Officer, NAHCON, Abdullahi Muhammed, during the inaugural flight ceremony superintended by Acting President Yemi Osinbajo, which held at Nnamdi Azikwe International Airport, Abuja, few weeks ago, said the challenge of the increase in the 2017 hajj fare was evident but had been surmounted.