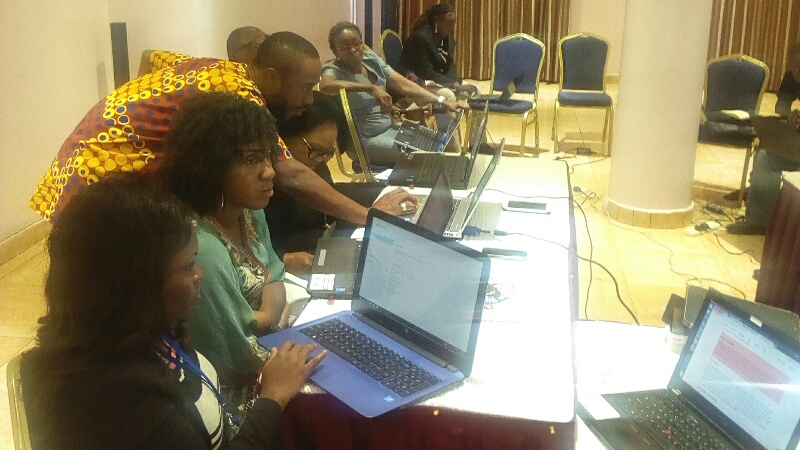 The event held at the Bolton Whites Hotels and Apartments, Wuse, Abuja.

The training is part of the PTCIJ’s efforts aimed at ensuring freedom of expression, digital, physical and psychosocial safety for journalists and the campaign against press gagging.

The training, which was a follow-up workshop to the first one held in Lagos earlier this year, had in attendance 16 journalists and 2 Independent Holistic Security Trainers as facilitators: Peter Nkanga and Xeenarh Mohammed.

The workshop was also part of PTCIJ’s vision for a media landscape that is truly independent and advances fundamental human rights, good governance and accountability in Nigeria through capacity building, open data and investigative journalism.

The training, supported by Free Press Unlimited, FPU a foundation based in the Netherlands, was adjudged fruitful by all the participants.

On the first day of the training, the facilitators made the training sessions very interactive.

In her introduction, Xeenarh Mohammed said: “The training is relevant because privacy and anonymity on the internet should be for everyone. We shouldn’t have our phone calls, SMS and emails monitored by governments and corporations. But if they wish to do so, it is our duty to protect ourselves and our private information with encryption. We need Privacy not because we have anything to hide, but because we don’t want to share every detail with the world. Just like we close the toilet door not because we are hiding anything but because what we do is private.”

The second session of the training centred on mobile devices where various mobile applications like choosing apps, psiphon, signal, orbot+orfox etc were discussed. The practical aspect of this session exposed participants on how they can circumvent and bypass internet restrictions and blocks using the mobile application.

Xeenarh also trained the participants on the use of Signal Private Messenger, a mobile application that allows users create encrypted groups so as to be able to have private conversations with many users at once.

The trainers, while taking journalists on digital security, explained how the internet works and what happens behind the scene when mails are sent and received.

The trainers enjoined participants to research more on what they had leant and extend the knowledge gained at the workshop to their colleagues.

Emphasising the commitment of PTCIJ to promote Press freedom, Freedom of expression, net neutrality and media plurality, PTCIJ’s Program Officer on the Free Press Unlimited Project, Aisha Hashim, said the workshop will “equip journalists and human rights defenders with the right tools and knowledge they need to face the various challenges of attacks, arrest and threat to digital, psycho-social and physical safety.”

Ms. Hashim lamented that many journalists reporting corruption, terrorism, human rights infringements are faced with ‘threats, harassments, attacks and many have had their phones, computers and email addresses intercepted by the Government or Corporations.”

The Digital Rights and Freedom Bill in the National Assembly which had passed second reading which provides for the control and regulation of surveillance and lawful interception amongst other press attacks informed PTCIJ’s zeal to organise the training.

One of the participants; Amazing Ekedebe of Magic 102.9 FM Aba, Abia State described the training as an enlightening session “into the other side of journalism’ with practical steps revealed which are essentially for holistic security while getting the job done.”

Another, Akufai Jonah of the Creative Media Centre for Development said: “The holistic security training has engineered me with theoretical and practical knowledge and skills on how I can protect myself physically, psychosocially and digitally while discharging my civic role. The training has also afforded me opportunity to learn from other participants while also sharing my experiences in addition to leveraging the support of other participants after and beyond the training.”