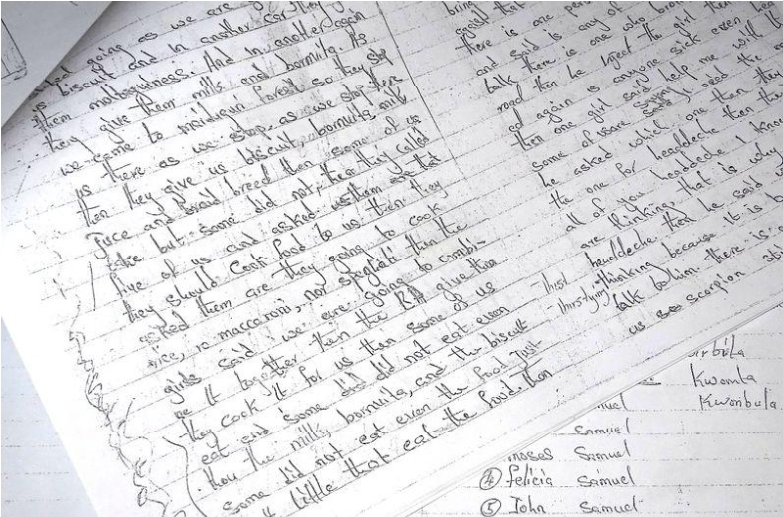 A page of a diary kept by girls abducted from Chibok by Islamist militant group Boko Haram in northeast Nigeria are shown in this photo taken on August 16, 2017. THOMSON REUTERS FOUNDATION/Adaobi Tricia Nwaubani

The mass abduction of more than 200 Nigerian schoolgirls from Chibok – the biggest publicity coup of Boko Haram’s jihadist insurgency – was the accidental outcome of a botched robbery, say the girls who spent three years in their brutal captivity.

The Chibok girls made the surprise revelation in secret diaries they kept while held prisoner and a copy of which has been exclusively obtained by the Thomson Reuters Foundation.

Recalling the night of their kidnapping in April 2014, Naomi Adamu described in the diaries how Boko Haram had not come to the school in Chibok to abduct the girls, but rather to steal machinery for house building.

Unable to find what they were looking for, the militants were unsure what to do with the girls.

“One boy said they should burn us all, and they (some of the other fighters) said: ‘No, let us take them with us to Sambisa (Boko Haram’s remote forest base) … if we take them to Shekau (the group’s leader), he will know what to do'”, Adamu wrote.

She was one of about 220 girls who were stolen from their school in the northeastern town of Chibok one night in April 2014 – a raid that sparked an international outcry and a viral campaign on social media with the hashtag #bringbackourgirls.

Championed by former U.S. First Lady Michelle Obama – along with a diverse cast of media celebrities – the campaign won international infamy for Boko Haram and helped galvanize the Nigerian government into negotiating for the girls’ release.

Adamu was among 82 of the Chibok girls released by Boko Haram in May – part of a second wave after 21 of them were freed in October. They are being held in a secret location in Abuja for what the government has called a “restoration process”.

A few others have escaped or been rescued, but about 113 of the girls are believed to be still held by the militant group.

The authenticity of the diaries, written by Adamu and her friend Sarah Samuel, cannot be verified, nor their intended role as the government negotiates with Boko Haram for more releases.

The diaries shed light not only on the horrors the girls endured under Boko Haram, but their acts of resistance, and their staunch belief that they would one day go home.

The girls said they started documenting their ordeal a few months after the abduction, when Boko Haram – whose name loosely means ‘Western education is sinful’ in the local Hausa language – gave them exercise books to use during Koranic lessons.

To hide the diaries from their captors, the girls would bury the notebooks in the ground, or carry them in their underwear.

Three of the other Chibok girls also contributed to the undated chronicles, which were written mainly in passable English, with some parts scribbled in less coherent Hausa.

“We wrote it together. When one person got tired, she would give it to another person to continue,” Adamu, 24, said from the state safe house in the capital, where the girls are being kept for assessment, rehabilitation and debriefing by the government.

The girls’ spirits remained intact, as they devised amusing and mocking nicknames for the fighters, the diaries show.

Yet cruelty and brutality were ever present.

When five girls tried to escape, the militants tied them up, dug a hole in the ground, and turned to one of their classmates.

The jihadists handed her a blade and issued a chilling ultimatum: ‘cut off the girls’ heads, or lose your own’.

“We are begging them. We are crying. They said if next we ran away, they are going to cut off our necks,” Adamu wrote.

On another occasion, the militants gathered those girls who had refused to embrace Islam, brought out jerrycans and threatened to douse them in petrol then burn them alive.

“They said: ‘You want to die. You don’t want to be Muslim,(so) we are going to burn you,” read the diary entry.

As fear set in, the militants cracked into laughter – the cans contained nothing but water, the girls wrote.

FEAR DOES THEIR BIDDING

One of the most striking excerpts illustrates the pervasive fear spread by Boko Haram in northeast Nigeria, where the group has killed 20,000 people and uprooted at least 2 million in a brutal campaign that shows no signs of ending soon.

During their captivity in the Sambisa forest, some of the Chibok girls escaped, and ended up in a nearby shop where they asked the owners for help, as well as food and water.

“The girls said: ‘We are those that Boko Haram kidnapped from (the school) in Chibok,'” Adamu wrote. “One of the people (in the shop) said: ‘Are these not Shekau’s children?'”

The shop owners let the girls stay the night.

But the next day they took them back to Boko Haram’s base, where the girls were whipped and threatened with decapitation.

Despite being flushed with relief at her own freedom, Adamu worries about her closest friend and co-author, Samuel, who is still with the group, having married one of its militants.

“She got married because of no food, no water,” Adamu said from the government safe house in Abuja.

“Not everbody can survive that kind of thing,” she added. “I feel pained … so pained. I’m still thinking about her.”

This article was originally published by The Reuters Foundation. We have its permission to republish.

Osinbajo off to Rwanda