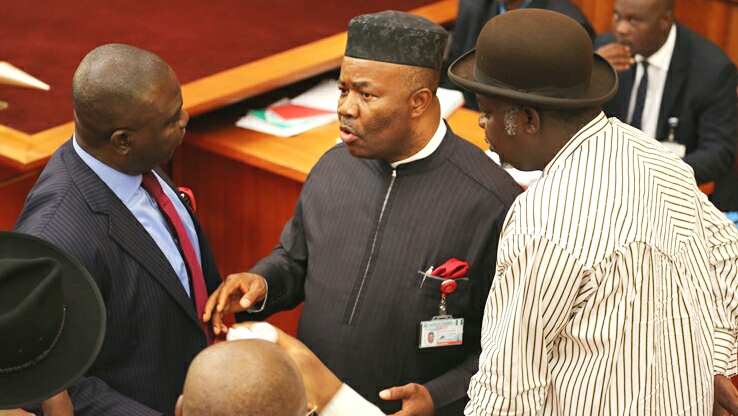 The chairman of Peoples Democratic Party (PDP) Senate caucus, Godswill Akpabio, has said that the party will not support any separatist agenda in the country.

Mr. Akpabio made this known while speaking at the Non-Elective Convention of the PDP in Abuja on Saturday.

He said the party would continue to promote anything that would ensure the peace and unity of the country.

Mr. Akpabio, who is also the Minority Leader of the Senate, condemned hate speeches in some parts of the country, saying the unity of the country was non-negotiable.

He assured of the PDP’s support for policies of the present administration.

On the PDP’s stance on fight against corruption, Mr. Akpabio said it believed strongly in the cause, saying it was a PDP government that established the Economic and Financial Crimes Commission (EFCC).

“Corruption is endemic and it was brought about by the colonial masters.

“In 1960 when the Governor-General of Nigeria was handing over to the elected government of Alhaji Tafawa Balewa, one of the things he said was that the problem of Nigeria was corruption.

“So, it is not a Nigerian invention and PDP has been fighting it.

“We must distinguish between fighting corruption and persecution. They are two different things,’’ he said.

Mr. Akpabio lauded the recent Supreme Court judgment on the leadership of the PDP, and said that the judiciary restored sanity in the party.

He said with the judgment, the party was poised to act as a viable opposition, while working towards ensuring good governance.

“What a beautiful moment this is for democracy in Africa.

“Nigeria is the largest black nation in the world, and a country with the population of over 170 million people cannot afford to disintegrate.

“The only way the black race can have respect is for Nigeria to have a stable democracy and the only thing that shows democracy is the legislature.

“That is why we are here in our numbers as senators, House of Representatives members and all of you gathered here today.

“We all represent democracy and that is what the PDP stands for. PDP stands for a show of the will of the people to determine who leads them,’’ he said.

Mr. Akpabio assured party members who had defected to other parties and anyone willing to join the party that its doors were open to accommodate them.

He congratulated the Chairman and members of the National Caretaker Committee of the party and pledged the continued support of PDP senators in moving the party forward. (NAN)