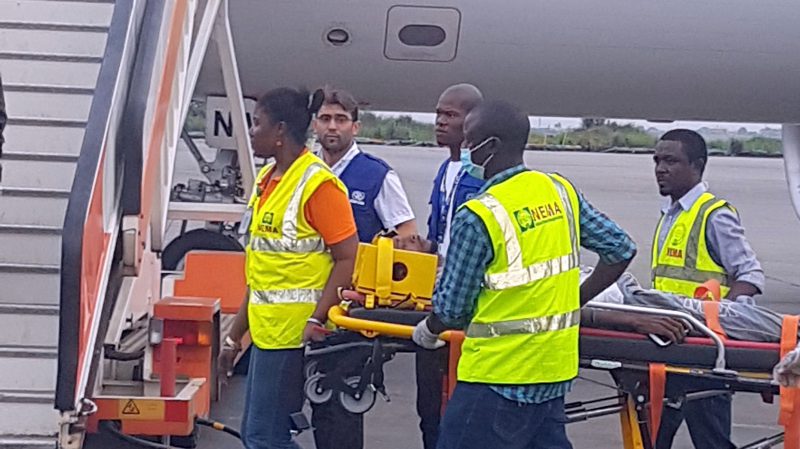 A batch of 128 Nigerians deported from Libya arrived in Lagos on Thursday aboard a chartered Airbus A320 Afriqiyah aircraft with registration number 5A-ONA.

The News Agency of Nigeria reports that the aircraft landed at 5.3 p.m. at the Murtala Muhammed International Airport, MMIA, Lagos.

The deportees, comprising 126 males and two females, were flown back into the waiting hands of officers of the Nigerian Immigration Service, the National Agency for the Prohibition of Trafficking in Persons, NAPTIP, and the Police.

Also on ground were officials of the National Emergency Management Agency, NEMA, and the Federal Airports Authority of Nigeria, FAAN.

The Director General, NEMA, Mustapha Maihaja, represented by Suleiman Yakubu, Zonal Coordinator, South West, NEMA, used the occasion to counsel Nigerians not to be deceived by phantom promises in their quest for pastures.

He said that one of those who returned had sustained bullet injuries all over his body and had been stretchered into a NEMA ambulance.

Mr. Maihaja said the victim would be taken to the Lagos University Teaching Hospital, LUTH, for proper medical attention.

He advised Nigerians to stay back and contribute their quota to the socio-economic development of the country.

“There are a lot of things you can do in Nigeria here. You don’t have to travel outside the country in search of greener pastures.

Mr. Maihaja said NEMA and some state governments had put various schemes in place to help rehabilitate and reintegrate returnees into the society.

The Director-General, National Agency for Prohibition of Trafficking in Persons, Julie Okah-Donli, had on Wednesday said that 540 Nigerians were set for deportation from Libya, beginning from August 10.

She had said that the deportees would be brought back to Nigeria in three batches.

Thousands of Nigerians have been flown back from Libya, with some voluntarily returning with the help of the International Organisation for Migration.