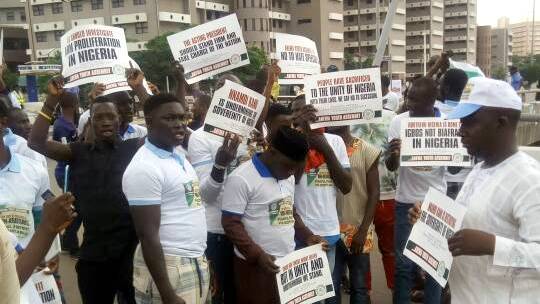 Following the lapse of its 10-day ultimatum to the federal government to order the arrest of the leader of the Indigenous People of Biafra, IPOB, Nnamdi Kanu, a northern youth group on Wednesday staged a peaceful protest in Abuja.

Scores of members of the group, Arewa Youth Assembly, AYA, gathered at the Unity Fountain in the Central Business District at about 9 a.m. and marched to the junction of the Presidential Villa.

They warned the federal government that it risks their wrath if it delays in meeting the demand to take Mr. Kanu back into custody.

The group had in a statement on July 27 threatened to shut down federal government activities in Abuja if Acting President Yemi Osinbajo fails to order the arrest of Mr. Kanu who is on bail.

Mr. Kanu, who is championing a Biafran secessionist call, is being prosecuted for alleged treasonable offences.

Members of AYA said the IPOB leader has been violating his bail conditions and that his antics threaten peaceful coexistence of the people of Nigeria.

Mr. Kanu was granted bail by a Federal High Court in Abuja on April 28 on stringent conditions, some of which is to avoid speaking with the press or being in a crowd of more than 10 persons.

Speaking to PREMIUM TIMES, Mohammed Salihu, who spoke for the northern youth group, reiterated its threat to shut down government activities in Abuja if the acting president fails to act as it had demanded.

“I will be very brief. We organised this peaceful protest as a warning and reminder to federal government to arrest Nnamdi Kanu now.

“The Arewa Youth Assembly will not make a U-turn on its decisions. We intend to carry out our proposed plans and nothing can stop us.

“We will mobilize thousands of youth to shut down government activities in Abuja after our congress meeting next week Saturday,” he said.

A team of police officers monitored the group’s procession from a distance before the group dispersed shortly before noon.