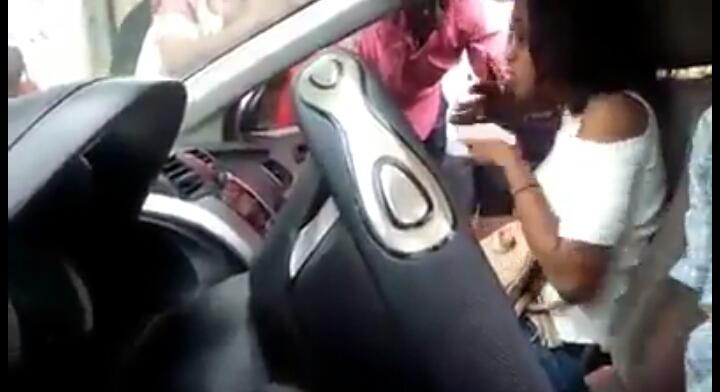 Screen shot from the video

A dramatic scene played out at the town campus of the University of Uyo, Akwa Ibom State, on Monday afternoon when a female student of the school held a man ‘hostage’ for refusing to pay her after he allegedly had sex with her.

The incident, which took place in front of the main gate of the university, was captured in a six-minute video posted on the Facebook page belonging to Inside Uniuyo.

The video shows a middle-aged man on the driver’s seat of a brown-colour Honda Civic car, rejecting entreaties from passers-by, apparently students, who were persuading him to “settle” a female student who had spent a night with him.

“Settle”, a euphemism in Nigeria, means to pay a bribe or give money for an illicit act.

“I gave her N2,000 she refused to collect,” the embattled man is heard screaming at those who were begging him to “settle” the student.

“I didn’t do anything with her. I had asthma yesterday night,” the man said in an angry tone.

The identity of the man and that of the student were unknown.

The female student, who appeared unperturbed, was busy eating boiled groundnuts from a cellophane bag on her laps.

She wore a turtle-neck milky top on blue jeans trousers.

The man said he picked the student in front of the school gate the previous day and took her out for a night. But he insisted that both of them didn’t have sex because he had an asthma attack.

“It’s a lie, this man slept with me last night,” she said to the crowd which surrounded the car.

The man yelled at her to get down from his car. “I have given you money, what do you want again?”

The girl retorted, “You never see something!”

The man yelled again at her to call the police or go to the court if she really felt he owed her.

The student, from the video, demanded that the man pay her N20,000.

By now, more people are seen trying to talk to the man to add some extra money to the N2,000 he was offering the student. The people could be heard telling the man to save himself the embarrassment.

“Settle what with her? Am I a criminal? Did I steal anything from her?

“Why should I give her that kind of money? Did I buy anything from her?”

One of the persons trying to intervene asked him, “Did she jump into your car or you took her from somewhere?”

The man responded: “Did I force her into the car? Is she an underage?”

The other man asked again, “Did you do something with her?”

“I said I didn’t. I had asthma. She is a witness. Ask her. I didn’t do anything.

“We stayed in the room. But we didn’t do anything. I had asthma.”

“Oga, what did you expect when you carried her home?”

“Did she tell me a price? Is she ashawo (prostitute)?

“If she were ashawo, I wouldn’t have carried her.”

One male student in the video is heard speaking in Igbo language to the female student, pleading with her to collect the money that the man was offering her.

She too was adamant on her demand.

Later, a police pick-up truck is seen arriving the scene. A mobile policeman came down and took both the man and the student away, while the crowd booed.

The spokesperson for the University of Uyo, Godfrey Essien, couldn’t be reached at the times of filing this report, as his phone line was switched off.