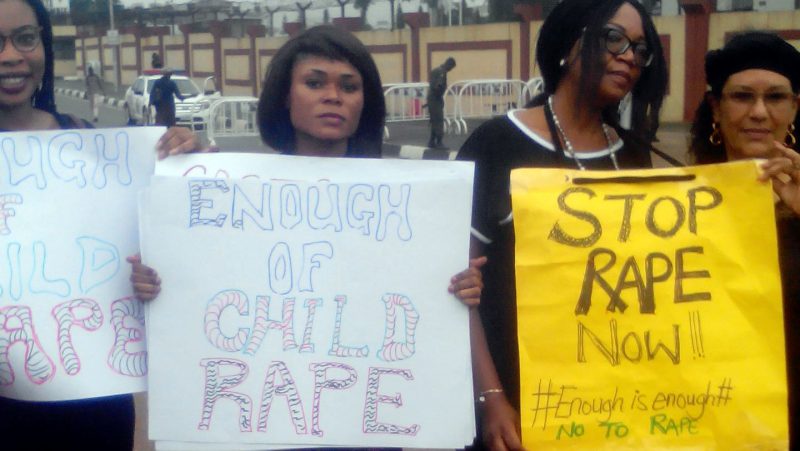 War Against Rape (WAR), campaign used to illustrate the story

Protesters on Thursday stormed the Lagos State governor’s office to demand an end to rape cases in the state and across the country.

The protesters, who campaigned under the aegis of different civil society organisations including War Against Rape, WAR, said they were demanding an end to rape of children and babies.

A protester who identified herself as Lailah told PREMIUM TIMES that it was important for the government to address the menace in the state before victims began to take laws into their own hands.

“It is important to look into this issue before victims begin to resort to jungle justice,” she said.

“They say it is the provocative way women dress. Okay. But how do little kids dress? How do school children who are raped dress?

“The Lagos state government must act decisively on this issue as it is becoming too rampant.”

PREMIUM TIMES reports that the protesters stood at the front of the governor’s office for several hours, chanting solidarity songs.

Similarly, hundreds of women in Gombe on Thursday staged a peaceful protest against incessant cases of rape in the state.

The News Agency of Nigeria reports that the women, who, were in black apparels, carried placards with various inscriptions denouncing rape.

Speaking to newsmen, Jamila Sulaiman, Coordinator, “Women Situation Room’’, an NGO, said that their decision to stage the protest was informed by the death of a 14-year-old girl who was a victim of rape in Anambra.

“Enough is enough. As women, we are dressed in black symbolising pain, grief and agony,” she said.

She said that cases of rape in Gombe and other parts of the country were on the increase without lawful conviction.

“There are so many cases of rape of babies and even women on daily basis with no lawful convictions.

“We want justice for rape victims, let the culprits face the wrath of the law,” she said.

The coordinator further appealed to Gombe State Ministry of Justice to enforce a stiffer penalty for convicted rapist.

Meanwhile, the Muslim Rights Concern (MURIC) on Thursday said the protest that took place in Lagos was misplaced and the protesters themselves were ill-informed and misguided.

A statement by Ishaq Akintola, MURIC’s president, said the protest was a “sheer cosmetic exercise”.

The organisation explained that rape is an affront against the dignity of womanhood and an assault on humanity which should be condemned in the strongest terms; but taking a protest against rape to the governor’s office is a “misdirection of target audience, a waste of man-hour and mere window-dressing.”

The body said the exercise cannot scratch the surface, talk less of hitting the subterranean region.

“Rape is on the increase mainly because moral bankruptcy has hit its peak,” the statement said.

“Women are no longer ashamed of exposing their bodies in public, whether in front or at the back. Even dresses which do not expose their bodies are sewn so tight that no one is left in doubt about the objective.

“It is the age of dress-to-kill. But women forget that many of them will fall victims of stray bullets.
Indecent dressing is a provocation and this is the issue which decent societies must address.”

The organisation said it is inviting WAR to launch a campaign against indecent dressing, adding that the way you dress is the way you will be addressed.

“You cannot send out a letter without receiving a reply. Many responsible corporate entities now disallow women who are scantily dressed from entering their premises,” it said, saying government’s role should only be complementary.

“The governor does not dictate your taste in fashion. Women who elect to cut their blouses low at the front and their skirts outrageously short above the thighs have deliberately entered into a contract with men who are sick upstairs.

“Women should be told in clear and unequivocal terms that indecent dressing constitutes sexual harassment.

MURIC, therefore, advised parents and guardians to pay special attention to what their female children and wards wear, adding that women should desist from dressing up little female children like adults.

“The movements of teenage girls should be strictly monitored and they should not be sent on errands to men. In addition, married women should learn to adorn themselves respectfully,” it said.