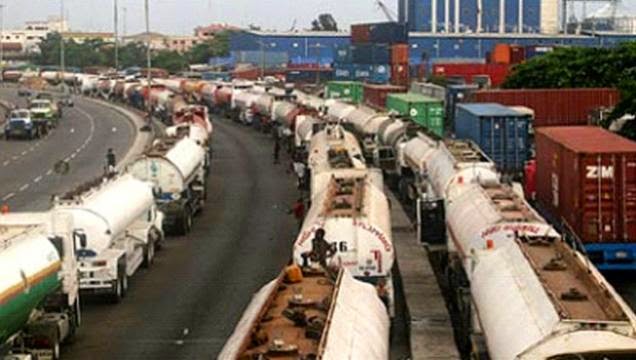 The Nigeria Union of Petroleum and Natural Gas Workers, NUPENG, says none of its members in Petroleum Tanker Drivers, PTD, unit was shot by Mobile Police officer in Apapa on Wednesday

Tokunbo Korodo, the Chairman in South-West Zone of the union, made the denial in an interview with the News Agency of Nigeria (NAN) in Lagos.

Mr. Korodo made the denial against reports that some tanker drivers were shot dead during a fracas involving some policemen during which two banks were set ablaze.

Mr. Korodo said he was able to confirm that none his members was killed from the report by a delegate sent from the union secretariat to Apapa to find out if any of the union members was involved in the lawlessness.

He said: “none of our members is involved; they are busy with the normal loading activities in different tank farms.

“The shooting incident involved drivers of articulated vehicles and those involved in the lawlessness were not PTD members.”

Tayo Aboyeji, the Zonal Public Relations Officer in PTD, said the fracas involved some drivers of articulated vehicles and the police, but not their members.

According to Mr. Aboyeji, “our members are not involved in any act of criminality or lawlessness in the area.”

“Our members are in their depots loading their trucks with the intention of transporting them to various locations across the country.

“None of our members was shot by police; they are in their various tank farms loading petroleum products.”

NAN reports that on Wednesday, a mob reportedly set two banks in Apapa, Lagos, on fire after a policeman attached to a Diamond Bank branch on Burma Road, allegedly shot and killed some trailer drivers.

According to reports, the mob also set ablaze a Sterling Bank branch on Wharf Road.

Angered by the killing and the bank’s refusal to hand over the policeman to them, other drivers marched in protest and set the banks ablaze.

The police later confirmed they had arrested the officer who shot the driver.