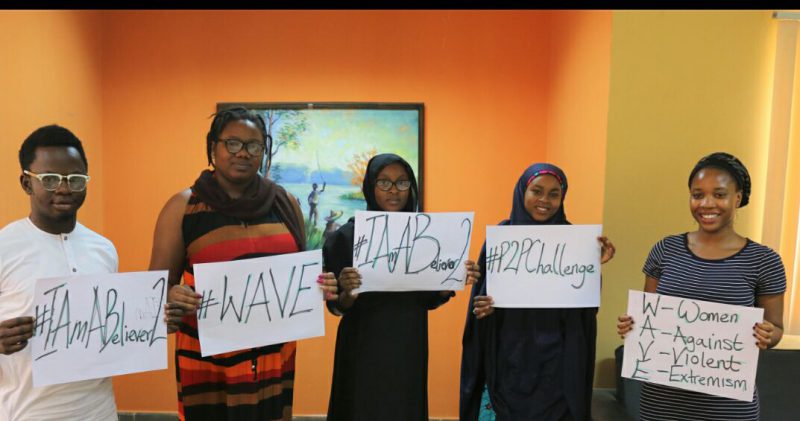 The Women Against Violent Extremism, WAVE, campaign, developed by AUN students, has reached the international final of the Facebook Global Digital Challenge.

AUN students will now present their campaign in Washington DC on July 19 along with three other finalists, after a semester of rigorous competition among 140 universities in 52 countries. The other finalists are CEU Universidad San Pablo (Spain), University of Dhaka (Bangladesh), and Xavier University (Philippines).

In a statement on June 30, Tony Sgro, the CEO of Edventure Partners – the implementers of the Facebook competition, congratulated the students for making it to the finals in Washington DC.

“Given there were so many fantastic campaigns this semester, it is a true compliment to your creativity, efforts and hard work.

“You will be making one of the most important and exciting presentations of your life in front of some very distinguished business leaders, diplomats, CVE professionals and media, among others,” Mr. Sgro stated.

One of the students, Ebiuwairo Uwagboe, who was the Creative Director for the campaign, expressed the team’s joy for being recognised for their hard work.

“We are honoured to have been selected to represent Nigeria and Africa in Washington DC alongside other wonderful campaigns from the other finalists. We know it will be a tough competition but we are confident that we can come out on top”, she said.

The AUN students’ WAVE campaign, tagged #IAmABeliever2, seeks to promote religious tolerance in Nigeria by inspiring women and girls in the country to value their beliefs, respect the beliefs of others and take action against violent extremism within their communities.

According to a recent UNICEF report, between 2014 and 2017, Boko Haram deployed 117 child suicide bombers, 80% of which have been girls, some as young as eight years old. The students used the hashtag #SchoolGirlsNotSuicideBombers, to raise awareness on Boko Haram atrocities against young girls. They created short videos that demanded more action from the Nigerian government to stop the trend, citing UN Security Council Resolution 1325 that urges member states to take measures to protect women and girls during violent conflicts. The short videos achieved instant sensation online, reaching over 500,000 people and viewed over 150,000 times on Facebook. The campaign was featured on the Channels TV social action program, Channels Beam and on Gotel TV’s Safiya Breakfast Show and Spotlight.

Through their WAVE 100 Women Initiative, the students created over 100 women-led Whatsapp groups that went on to mobilize a community of over 10,000 women across Nigeria to challenge violent extremism within their communities.

The Faculty Adviser to the WAVE campaign team and Interim Dean of the School of Arts and Sciences, Jacob Udo-Udo Jacob, lauded his students’ achievement and their dedication to the program.

“Their accomplishment is a clear indication of the culture of excellence and rigor that AUN is known for. It is obviously a tribute to our mission as Africa’s development University and our commitment to extending our classrooms through civic engagement and community development programs. I am immensely proud” Mr. Jacob said.

The newly appointed AUN president, Dawn Dekle, congratulated the students for making the university proud and pledged the support of the entire AUN community to the team.

The WAVE campaign was designed and implemented as a practicum in the course, CMD 412 – ‘Public Diplomacy and Strategic Media Intervention’ in AUN’s Communications and Multimedia Design (CMD) program. Five students enrolled in the class will represent AUN at the finals in DC. They are: Fatima Bashir (CMD), Ebiuwaro Uwagboe (ICP), Amina Bamalli (CMD), Ritnen Gomwalk (CMD) and Isaac Simon (Petroleum Chemistry).

Student-teams in selected universities around the world are awarded $2000, after submitting a successful creative brief, to create authentic social and digital campaigns to challenge violent extremism in their communities using the power of social media. The top four campaigns from around the world are selected by judges for presentation to a distinguished panel of experts and policy analysts in Washington DC.

The competition, which is held every semester, is sponsored by Facebook as part of its global effort to challenge extremism online, in partnership with the U.S. Department of Homeland Security, the Organization for Security and Cooperation in Europe (OSCE) and EdVenture Partners, a California-based strategic Communications firm.

CMD 412 students in Fall 2016 semester developed the first phase of the #IAmABeliever campaign and went on to win first place at the African Regional Finals in Ghana. It is the first time that any university from Africa has made it through to the international finals since the program started three years ago.