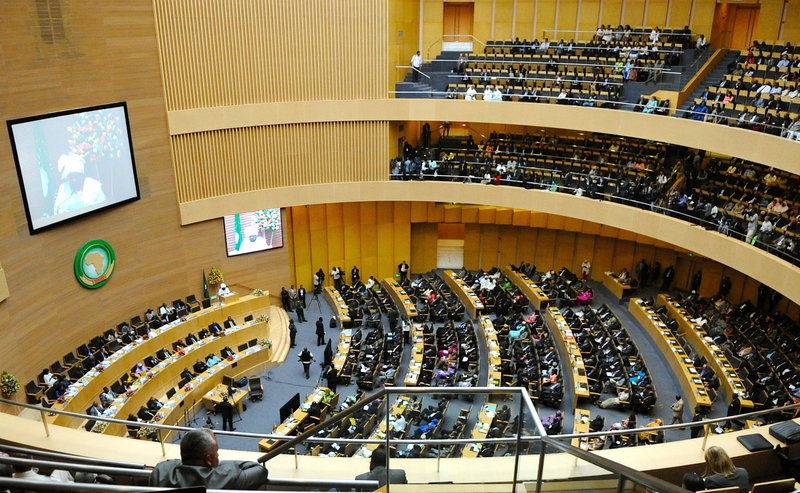 African leaders on Tuesday unanimously endorsed President Muhammadu Buhari to champion the fight against corruption in the African Union.

The News Agency of Nigeria reports that the endorsement came at the end of the 29th Ordinary Session of the Assembly of AU in Addis Ababa.

President Buhari is expected to lead the AU summit scheduled for 2018 entitled: “Winning the Fight Against Corruption: Sustainable Path to Africa’s Transformation,’’

Nigeria’s Foreign Minister, Geoffrey Onyeama, who gave a synopsis of the summit told the News Agency of Nigeria that the endorsement was in recognition of the President Buhari administration’s commitment and glowing success in the fight against corruption in Nigeria and globally.

“The endorsement is very significant because it is the recognition of the negative role corruption and bad governance had played.

“I think it is also significant that President Buhari was also asked to champion this because he has been a major inspiration to Africa in frontally combating corruption and bringing positive change towards building a sustainable and prosperous continent.

He said the president will, therefore, be expected to provide exemplary and resourceful leadership by working closely with the other African leaders.

Others are, the AU Commission and development partners to collectively fashion out common programmes for continent-wide application of the anti-corruption theme in all Member States.

“The championship role by President Buhari will also involve a number of diplomatic initiatives to sensitise and raise awareness of the International Community on the dire consequences of corruption and the collective strategies to defeat it.

On the need to set up the African Security Fund, ASF, Mr. Onyeama said the time has come for the continent to be independent and break free from foreign support.

“Up until now, a lot of our security activities were funded by non-African partners and what we have seen is that they have suddenly decided to cut back on what they were providing.

“This is impacting seriously on some of the AU missions like the mission in Somalia, South Sudan not being able to meet up financially.

“So, the decision was taken that when member states pay their financial contribution to the union, there should be a fund set aside to finance peace and security in the continent.’’

The minister, who spoke also on the role of Nigeria in ECOWAS, said the time has come for the country to take its leadership role in the organisation.

He said further that in order to have an organisation that works, it is also important that Nigeria does not act like a tyrant and that there are mechanisms for consensus.

“Nigeria can assert leadership and can also do it in a non-conflicted, inclusive and positive way, and that is what we are trying to do.

“There are currently 17 (political) positions allocated to certain countries.

“We (Nigeria) are looking for the position of internal services considering that we are largest contributors to the body.

“This is a portfolio that will give us the best oversight regarding our interest.

“The other is the position of a Judge at the ECOWAS Court Justice,’’

He said though there are challenges in filling the positions, “it is a work in progress and will not damage the ECOWAS too much.’’

Mr. Onyeama said that there was no agreement on the issue of position sharing in the ECOWAS but just a question of buying into a process.

He said that a technical committee has been set up to negotiate on what will be inclusive for all countries.

He said there is also the challenge of electing the President and the Vice of the ECOWAS Commission after the two years of setting up a reform committee.

On women and youth empowerment, the minister said the federal government was already addressing the issue by making it top priority.

Mr. Onyeama said the AU’s theme this year, “Harnessing the Demographic Dividend through Investments in the Youth” could not have come at a better time.

He said Nigeria was taking advantage of the issue of demographic situation in Africa with the large youth bulge with the introduction of the federal government’s N-power programme.

He said it was absolutely important that women and youth are empowered to enable them play more significant roles in the development of the nation.

“The N-Power programme and the social intervention of government are geared towards women in addition to the programmes for the youth.

“Especially, the vocational programmes, there is also a large part for women including entrepreneurs and helping those in the Small and Medium Enterprises (SME) with loans.

“So, on the economic front the empowerment of women is very much on and government is investing very much in it.

He, however, expressed concerns over lack of adequate representative of women in political and elective positions.

“In terms of elective positions, we are still not there yet, maybe it is something we should consider constitutional provisions in providing quotas on gender basis.

“Whether it will be a good thing or not, it is something that can be done; Rwanda has that and South Africa too.

“That is probably where we are going too but some will still argue that quota systems are not always the best because it gives the impression that beneficiaries do not usually have the capacity.

“But the reality is of course women are just as good if not better than men in many areas academically and so on.

The minister said a level playing field was required in recruitment of women, adding that it was the trend globally and in the continent.