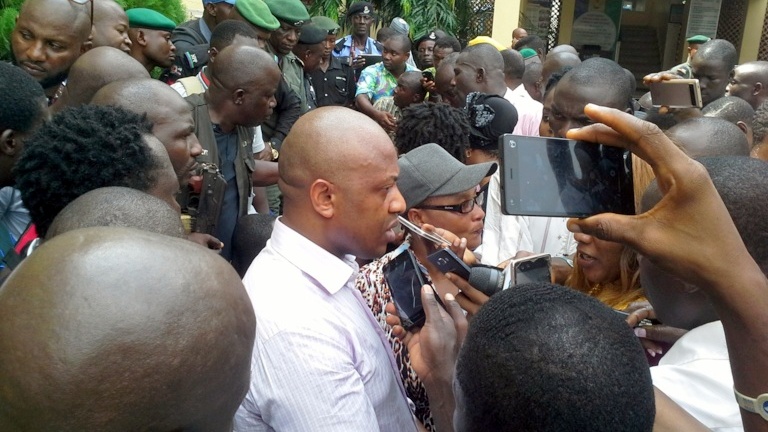 The billionaire kidnapper, Chukwudumeme Onwuamadike, otherwise known as Evans, on Thursday filed another suit against the Inspector General of Police, and three others at a Federal High Court in Lagos.

In the new suit, Evans is claiming N300 million as general and exemplary damages against the police for “illegal detention and unconstitutional media trial”.

Joined as respondents in his new originating motion are the Nigeria Police Force, the commissioner of police Lagos State and the special anti-robbery squad, Lagos State Police Command.

Earlier on June 28, Evans had filed an ex-parte application before the same court, seeking an order directing the respondents to charge him to court.

He had also sought an order directing the respondents to release him unconditionally where no charge is preferred against him.

According to an affidavit deposed by his father, Stephen Onwuamadike,  the applicant argued that he has been subjected to media trial without any court order by the respondents.

Mr. Onwuamadike further argued that the media trial and news orchestrated by the respondents have continued to generate reactions in both print and electronic media without his son being afforded fair hearing before a court of law.

The applicant, therefore, argued that his continued detention by the respondents since June 10, without a charge, or release on bail, is an infringement on his fundamental rights.

The News Agency of Nigeria, NAN, reports that in his new suit marked FHC/L/CS/1012/ 2017, the applicant is seeking a declaration that his continued detention since June 10 without arraignment, violates his fundamental rights as guaranteed under the 1999 constitution.

Evans is therefore seeking a declaration that his parade on June 11 before journalists in Lagos, at the Lagos police command headquarters in Ikeja, without any court order, is unconstitutional and illegal.

He is consequently seeking an order compelling the respondents to immediately arraign him before a law court, or release him from custody immediately.

The suspect is also seeking an order of perpetual injunction, restraining the respondents from further arresting, detaining, harassing, investigating or inviting him in relation to the facts of his case.

Evans and six of his co-conspirators were arrested earlier in June, after officers stormed the kidnappers’ den and engaged in a gun battle which lasted several hours.

The gang primarily kidnapped victims in Lagos State but have also kidnapped prominent Nigerians from other parts of the country.