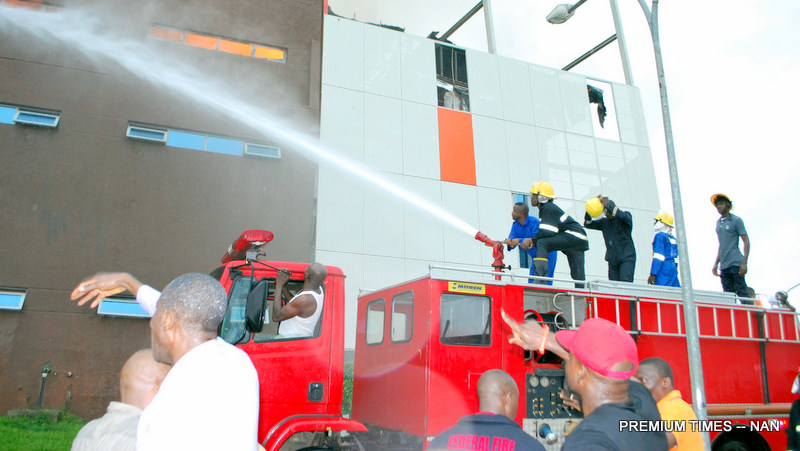 House On The Rock inferno contained, firefighters to remain at scene — Official

Firefighters will remain at the site of a massive inferno that razed the Abuja branch of House On The Rock Church on Sunday, although the incident has been largely contained, officials told PREMIUM TIMES.

“Our officials arrived at the scene around 2:40 p.m. shortly after receiving an emergency call,” Mr. Julius told PREMIUM TIMES by telephone on Sunday night. “They were able to fully contain the fire a few hours later.”

But he said two firefighting trucks will remain at the scene for another day or more to monitor the situation.

“We have stationed two trucks there because another fire could break out from another part of the building,” he said.

The official said the fire caused a major destruction to the building, and church workers have been advised to stay away from the premises in the interim.

He said the Federal Fire Service will investigate the incident if asked to do so by the church.

Fire service and emergency management officials earlier told PREMIUM TIMES the fire was yet to be fully contained as at 7:04 p.m.

A firefighter requested his name should not be printed because he was not authorised to give updates about the incident.

NEMA officials say they’re coordinating emergency activities at the scene with the firefighters.

It remained unclear exactly when the fire broke out, but those who worshipped at the parish today said on social media that there was no such incident before most of them departed between 12:00 and 1:00 p.m.

Details, such as the possible cause of the inferno and the estimated time it broke out, are yet to be ascertained.

No church official was immediately available for comments. An email enquiry sent to the address listed on the church’s website returned undelivered Sunday evening.

Gunmen kill police officer, one other