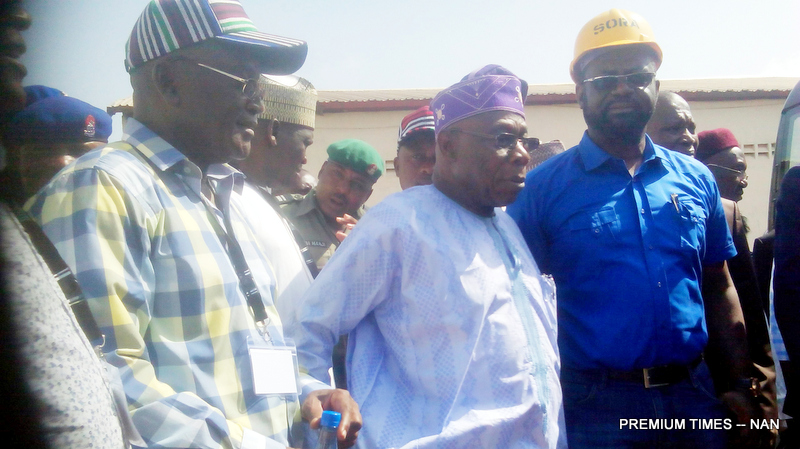 Gov Samuel Ortom of Benue State (L), former President Olusegun Obasanjo (M), and others during the visit of the former President to Benue Fertilizer Plant, in Markudi on Friday (9/7/17). 03131/9/6/2017/Nicholas Dechi/HB/ICE/NAN

Mr. Obasanjo spoke on Saturday in Makurdi after commissioning the Schools of Nursing and Midwifery.

He said he was impressed with what he saw at the two schools, which lost official recognition for the past three years, but with the help of the governor they regained accreditation.

He said all the facilities that were lacking, have been provided by the governor, adding that it was not a mean feat.

The former president said with what he had seen so far, Mr. Ortom was doing well and needed to be given more time to consolidate on his achievements.

He also urged people in privileged positions to indulge in things that could usher development.

He also stressed the need them for them to work for the unity of the country, and stop finding faults on everything rather they should strive to correct imperfections anytime they notice them.

He also admonished people against singing songs of discord and disunity, saying they should rather work for the unity of the country.

Mr. Obasanjo commended Mr. Ortom for signing the anti-open grazing bill into law, saying that it would put an end to situations where animals destroy crops in the process of grazing.

Former governor of the state, George Akume, appreciated the former president for always keeping people in leadership positions on their toes through constructive criticisms.

Mr. Ortom said he lacked words to express his appreciation to Mr. Obasanjo for coming to Benue to commission the project and see things for himself.

The governor appealed to the people to venture into massive agricultural activities in order to improve on their income.