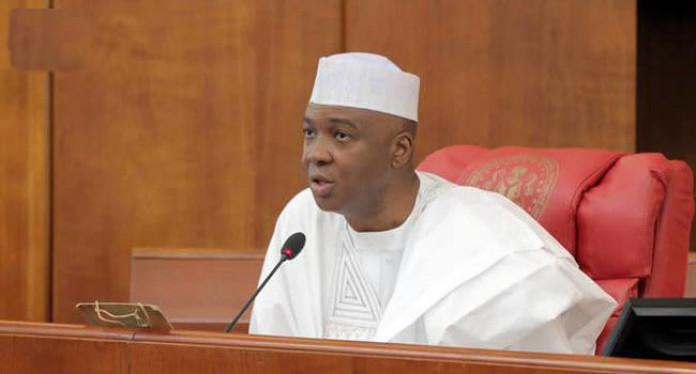 There were 106 lawyers in the defense team of Senate President Bukola Saraki on Thursday, as the false asset declaration case against Mr. Saraki came up for hearing at the Code of Conduct Tribunal.

The tribunal postponed its ruling on a no-case submission application made by Mr. Saraki.

The tribunal chairman, Danladi Umar, said he would communicate the date for the ruling on the application after considering the submissions of council in their written adresses.

Earlier counsel to Mr. Saraki, Kanu Agabi said the prosecution had failed in establishing a case against his client.

Mr. Agabi, a former Attorney General of the Federation, said the charges against his client were based on petitions written by faceless petitioners.

He added that the reports of the petitions were never made available to the tribunal for verification.

Mr. Agabi said the petitions alluded to by the investigators did not have anything to do with the defendant, adding that the petitioners were never called to testify in court.

Mr. Agabi further argued that the alleged failure to include some assets in the defendant’s declaration form should not be construed as false declaration of assets.

Prosecution counsel, Rotimi Jacobs, however argued that investigation conducted were based on intelligence information. He said the investigation team did not need the petitioners to be present at the trial.

Mr. Jacobs, a Senior Advocate of Nigeria, said the defendant had made another declaration after the case began which included the list of assets that were allegedly omitted.