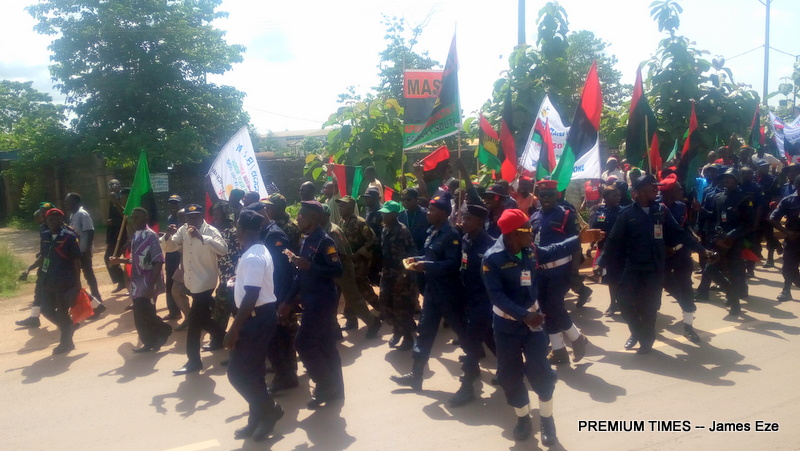 At least 50 members of the Biafra Independent Movement (BIM), Ebonyi State, were arrested by the police in Abakaliki, the Ebonyi State capital when the group staged what it called the ‘new Biafra’ commemoration rally.

Over 2000 persons bearing Biafra flags flooded the capital city during the rally which saw policemen at strategic locations.

It was gathered that those arrested were pro-Biafra agitators who were on their way from Ohaukwu and Onueke to join the rally in the state capital.

The Biafra agitators had marched from the popular Spera-In-Deo junction to Presco junction Abakaliki to purportedly commemorate Biafra independence.

BIM leader in the state, John Nwifuru, said the group were guarded by a team of policemen to ensure it was not hijacked by hoodlums.

He assured that those arrested by the police would be released as, according to him, he has spoken with police authority on the matter.

“Our rally was very successful and we don’t have any problem despite mobile policemen that disturbed early in the morning when we were converging for the rally,” Mr. Nwifuru said. “They arrested about eleven Biafra security boys at Ohaukwu, them about 16 in Nkwegu and others.

“I have discussed with the CP and he assured me that those arrested will be released immediately and I want to thank him for supporting our event because policemen marched with us, wherever we reached, they reached with us to ensure that we have no problem with anybody and we conducted ourselves orderly.

“We did not cause any traffic jam and everything went successful. 15,000 of our members participated in the rally. We marched from Spera-in-Deo junction to Presco junction to Ahia Ofu junction and old timer shade and we dismissed because of the elderly ones who were getting tired.

“We are commemorating the new Biafra which Uwazuruike declared on 22nd May, 1999 and the celebration continues till 30th of this month when we will end it with football match.”

Meanwhile, the Movement for the Actualisation for the Sovereign State of Biafra (MASSOB) has dissociated itself from the rally held by BIM across the states of the southeast.

MASSOB in a statement by its National Secretary, Ugwuoke Ibem Ugwuoke, said its members did not take part in the rally.

“The people on the streets today displaying the Biafra flag are not MASSOB members as they may claim, they are members of Biafra Independent Movement (BIM) observing their own Biafra day”.

” MASSOB under the leadership of Comrade Uchenna Madu will observed the 50th anniversary of declaration of Biafra by General Chukwuemeka Odumegwu Ojukwu on 30th May,2017 with a sit-at-home exercise in honor and remembrance of Biafra gallant soldiers and civilians that laid down their lives for the establishment of the Republic of Biafra during the genocidal war against the people of Biafra in 1967–1970.

“As MASSOB will honour the fallen heroes that died during the war, we will also remember the victims of the current struggle for the actualization and restoration of Biafra. MASSOB is not against BIM or any other group but warned that our should not be attached to Uwazuruike led BIM. We have only one MASSOB under the leadership of our leader, Comrade Uchenna Madu.”

Embattled Brazil President says ‘I won’t resign, oust me if you want’